The Lenin Of Khujand

Khujand can trace its history back to the times of Cyrus the Great and Alexander the Great.

Fast forward 2000 years and we reach another giant in history!

As Soviet power swept across central Asia, many of the countries that were formerly under the control of the Russian empire we soon recollected by this new red giant.

In some areas, there may have been a little resistance, but eventually the soviet prevailed.

Tajikistan, like many of its neighbours, was to have its borders drawn and redrawn a few times.

Eventually, lines were settled, and the ink was allowed to dry.

Within the boundaries of the new Tajik Socialist republic lay the ancient city of Khujand. Khujand is and has always been a settlement of much promise. Khujand was not only strategically located on the silk road but lay at the heart of the Fergana valley. The Feranga valley is a geological depression amongst a rugged mountainous area. Agriculture, Mining and ease of transport have long made this rich valley a prized asset to any country.

The worth of this valley throughout the ages has not been lost successive conquerors have always left their mark we only have to look at the city of  Khujand. Khujand through the ages has been named Cyropolis after Cyrus the great and in later years Alexandria Eschate after Alexandra the great.

Now was the time of the soviet and Kujand was in 1936 to take on the name of Leninabad after that Soviet giant Vladimir Lenin!

The city was to go through a rapid transformation with rows of pristine soviet style apartments built, as well as factories, markets, shops and monuments added. The Soviet Union was for cities as IKEA is to furniture. Eventually in 1974 to mark the anniversary of Lenin's death Khujand was to receive its crowning glory a giant statue of Lenin.

The contemporary modernist soviet apartments surrounded Lenin's statue. This enormous monument gazed smugly over the Syr Darya river to the ancient city beyond. 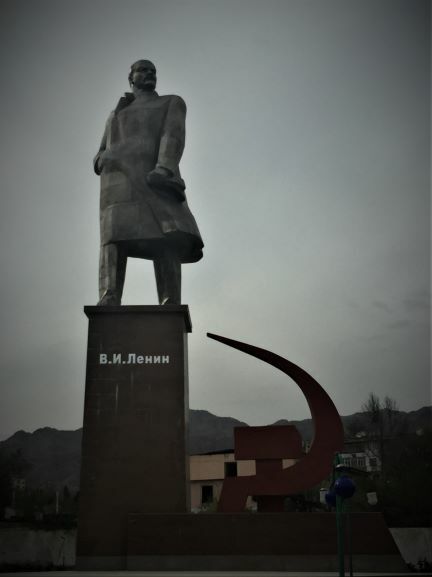 Erected in LFKGK 1974 the statue was to honour the 50th anniversary of Lenin's death, as Khujand was at the time known as Leninabad it would have to be a statue of equal standing.

Lenin's statue was 12 metres in height erected on a plinth of the same size. At a total height of 24 metres, the Khujand Lenin was the largest in Central Asia. Marking the central square, Lenin wasn't allowed to rest as he was moved to victory park in 2011.

Tajikistan declared its sovereignty on August 24th 1990, although it was to be officially recognized a little later on September 9th 1991.

Upon gaining independence, there was a vote in Khujand where it was decided to change the name of the city from Leninabad back to Khujand. Contra to popular belief Lenin at this time remained.

The giant Lenin statue of Khujand was to witness the changes through the city for another ten years. In 2010 the city government began work to remove this metal masterpiece although their plans were put on hold when members of the local community raised a protest.

Roll on May 30th 2011 7 PM at night and without any warning or fanfare; cranes roll into the central square.

First Lenin's head then the body and eventual his red plinth are all taken away. There was no celebration, beating of drums, some locals living nearby came to watch wondering what changes will occur whilst a few shed a tear.

Some travellers will tell you that Lenin was removed and carted off to the city limits where he resides in a field slowly rooting away.

In reality, he may have lost his prime spot in the central square to the more ancient empire builder of Ismail Somani, but he didn't travel too far. For Lenin now stands just under a kilometre away in victory park surrounded by leafy green trees. 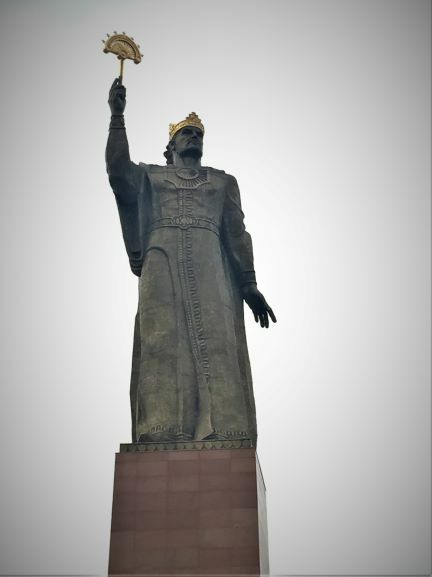 The park that Lenin now resides in is called victory park, within this small leafy green area, there are a few more monuments that shouldn't be forgotten or passed when on your way to see the big man!

Originally a monument erected to the soviet war dead it now stands as a reminder to a time past and for some marks the decline of the Russian dominance in the region.

This is a rather poignant memorial as it is dedicated to all of those locals who helped in the Chernobyl disaster.

A line of small plaques showing with pictures of local Tajik citizens on them. These citizens are people who performed acts of bravery during the second world war. 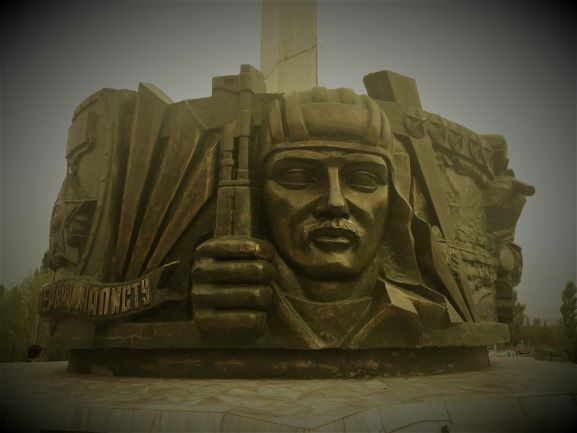