The flag of Mozambique is, perhaps most well known, for being the only flag in the world with a modern firearm depicted in its design, namely an AK-47 with a bayonet attached.

Whilst you may not regularly think about Mozambique, hidden away in the south-east of Africa, just north of South Africa, on the coast of the Indian Ocean, it has a long and complicated history, much of which depicted within the flag design. 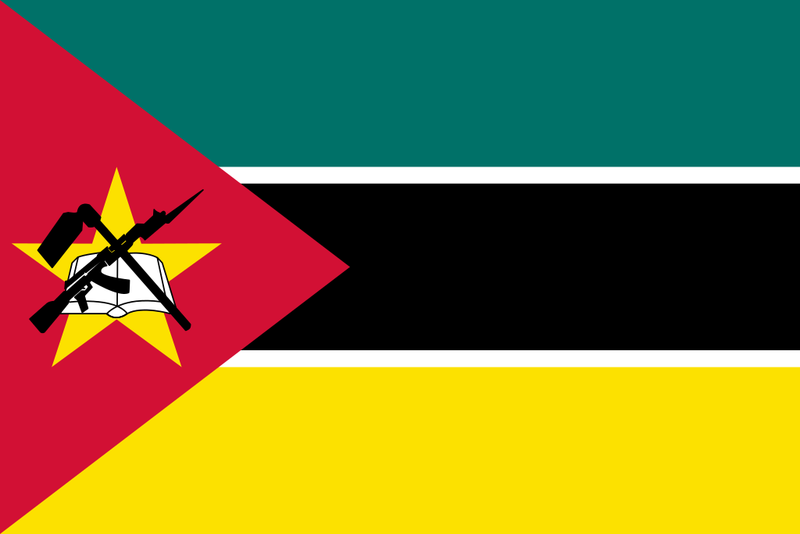 The flag of Mozambique is a classic tricolour design consisting of green, yellow and black.

Each horizontal bar is separated from the others by a thin white bar. On the hoist-side of the flag is a red triangle, similar to that on the flags of Palestine and Jordan.

Upon the red triangle is found an AK-47 crossing a hoe above a book. All of which is atop a yellow star.

The green represents the natural landscape of Mozambique and the rich environment of the country.

Black represents Africa. A colour commonly found in flags on the African continent.

Red represents the struggle for independence from Portugal which founded the nation as a colony in the 1400s, relinquishing control after a bloody civil war in 1974.

Each symbol on the crest represents a different national value;

Formed during the 1960s, the Frente de Libertação de Moçambique, or Mozambique Liberation Front (FRELIMO) was a militia group whose main objective was to fight the imperialist occupation of the Portuguese.

The FRELIMO flag depicts a crossed hammer and hoe with a yellow star above it. All emblazoned on a red background. Elements of this flag were later included in the national flag.

For a brief time between 1974 and 1975, the flag was changed to a design extraordinarily similar to the modern flag. A green, black and yellow horizontal tricolour with white bars separating each colour with a red triangle on the hoist-side. However, the crest of the modern flag was missing from this iteration.

Following the formation of a socialist government in Mozambique under FRELIMO, the flag changed once again. This time, the green, red, yellow and black were depicted as sunbeams emanating from a crest in the canton.

This crest depicted an AK47, a hoe, a book and a communist/Marxist star, the same symbols as on the modern flag.

The crest was surrounded by a cog, a common symbol of the proletariat and Marxist political thought at the time.

For a month in 1983, a new intermediate design came about. This unique design saw the return of the tricolour design, but with the crest inside the red hoist-side triangle over a yellow star.

Soon after, the cog and red star would be removed, leaving the rifle, hoe and book emblazoned on a yellow star—the modern flag of Mozambique.