It's no secret that Covid-19 sucks. A vast amount of suffering, pain, and even worse has been caused by this horrific outbreak and no people or industry are immune to its effects.

What began as a nuisance that closed North Korea's borders back in January has now become a global pandemic and quite frankly made 2020 really darn awful.

Whilst coming up with witty bits we could publish for April Fool's Day... We realised that a lot of what we have all been through here at Koryo Tours would have been like an April Fool's itself in 2019.

But 2020 did its thing and we have a whole bunch of weird stories that have come out of it.

Here's our collection of things we kind of wish were April Fool's jokes,  but were really just a sad and reality of 2020.

While in mandatory 2 week home quarantine in Beijing from March 15-29, various restrictions were placed on me (mainly do not go outside, apart from to pick up grocery deliveries from the step).

This was not too onerous all things considered and my sanity remained intact, even with one night spent trying to drown out the exceptionally loud screeching noise of two mating Siberian Ferrets in the courtyard outside the door (these cute but vicious creatures roam the Beijing hutongs, they are the apex predator of the area, hence why rats are almost never seen, even in the filthiest parts of the alleyways!).

As for garbage, though, the usual way is I have to take it out about 50m from my house to the public bins. However, being in quarantine meant that instead, a new method had to be found.

Easy enough (if environmentally disastrous, 2 plastic bags rather than one!).

All easy enough it seemed.

I told them I would need to step outside while doing this, they told me to do it inside, I pointed out that the stuff they gave me is very powerful and in the end they accepted that outside was a better idea. When doing it for the first time I didn’t realise quite how not-very-diluted the liquid was and now have a hoody with a bleached cuff and some socks with bleached dots all over them. Luckily I didn’t wear my Sunday best!

Anyway, for the 2 weeks I only needed to do this three times, tried to keep back some of the garbage back to throw out when liberated (maybe best not to show quite how many wine bottles needed to be chucked away after a quarantine period!) and also managed not to ruin any more clothes in the meantime.

The tiles outside my house now have a white stain on them from all the disinfectant though, like a low-end toxic waste dump, I await some rain to come and clear all that away!

"All of this with two kids, one of whom thinks we’re about to experience a zombie apocalypse"

I travelled to the UK in early January visited Cornwall and was stuck in the worst storm for 20 years.

My flight home to China was cancelled, so I headed to Mongolia, arriving just in time for their lockdown.

All entry and exits to Mongolia have now closed, so it looks I’ll be living out of my suitcase for another month.

All of this with two kids, one of whom thinks we’re about to experience a zombie apocalypse.

And to make matters worse the more I stare at my felt mat from Turkmenistan the more I think it has little virus pictures on (see attached).

Is this the kind of thing, I could continue, but I may spiral into a pit of depression or begin forming a blues ballad.

"I’m having my temperature taken several times a day and most readings suggest I am hypothermic."

In China, the taking of temperatures when entering residential compounds, supermarkets, metro stations and restaurants began early on in this episode and continues on for the foreseeable future to identify people with elevated temperatures. The intensity of this check has increased with more checks being done, and names and numbers being recorded. Technology has recently started entering the fray with complex thermal facial recognition cameras popping up in places such as metro stations, supermarkets and supermarkets that not only record your temperature but also take a photo of you.

Getting lunch from local shopping centre now requires a total of four temperature checks (three to get to the restaurant/shop, and one to get back into the office). All this just to get a sandwich that costs 14 RMB.

The majority of the checks are done by a person, either a security guard, volunteer or shop staff, with a handheld digital thermal thermometer. In many cases, the temperature reads as low as 34 degrees Celsius or even says ‘Lo’ and flashes red which suggests a problem. But yet the person lets me continue on my way.

"Pyongyang had once again simply pressed the ‘off switch’"

We re-launched Koryo Studio in December with Gareth Fuller’s wonderful Pyongyang Map. I am sure the map did not portend the closure of DPRK to the outside world, but it seemed fitting to have the show still up in our Studio space as a painful reminder that Pyongyang had once again simply pressed the ‘off switch’.

North Korea was the first country to close its borders and probably will be the last to re-open. But good things are worth waiting for, and the 75th-anniversary parades scheduled in August and October I am crossing fingers we will get access.

It still remains the most bizarre yet remarkable country to visit and this closure is not unusual. We were filming 'A State of Mind' when we were locked out of the country due to SARS in 2003, for the director Daniel Gordon it meant for the second time he had to postpone his wedding as filming was not complete.

The North Koreans also closed in preparation for the arrival of the Ebola virus in 2014, the fact the disease had never reached Asia was not taken into consideration.

Happy Aprils Fools, if you work in the world of tourism to one of the most enigmatic countries on earth you learn to expect them.

"Everything closed down apart from the dog grooming salon. And I needed a hair cut."

Going to the hairdresser is always a lottery.

No wonders I try to do my haircut in Korea (south or north).

Since I moved to Beijing three of my hairdressers closed.

All hairdressers closed down - apart from the dog grooming salon (that took over the place of my first hairdresser).

And I needed a haircut.

I left China mid-January for a 2-week language course in Seoul.

Corona was a meer word being batted around the street at that point, and still only really meant the beer.

Quickly, things escalated in China and I decided I'd take another week in South Korea - why not!

I also had planned a holiday at the end of March, so perfect timing would have me take the time off at the start of February instead.

I left the -15 degrees Celcius temperatures and headed for Fiji a month early than I had planned.

Coat and thermals away, I bought the essential bikini and a few shorts and t-shirts and... fast forward 2 months.

Tonga is a country in the South Pacific, known only by few for the popular whale-watching period around June every year.

I came to Tonga to escape social media and news and... general talk of Corona Virus.

This somehow back-fired as Tonga went on lock-down one day after I arrived and shut off all international flights.

So now I'm stuck on Tonga for the foreseeable future. (Time of writing; 2 weeks in, at least 2 weeks remaining. Presuming 2 months.)

(At least the beach is alright). 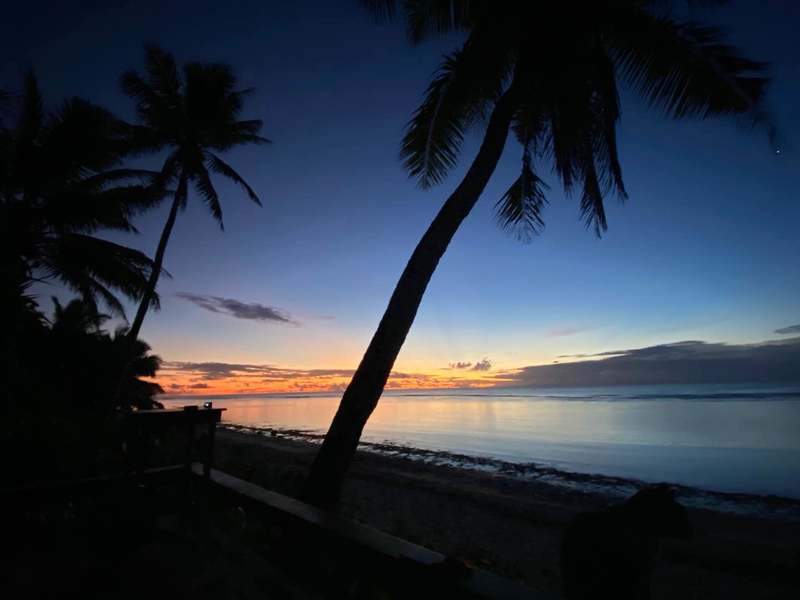 Cryptocurrency for use
in the North Korea tourism
industry released!