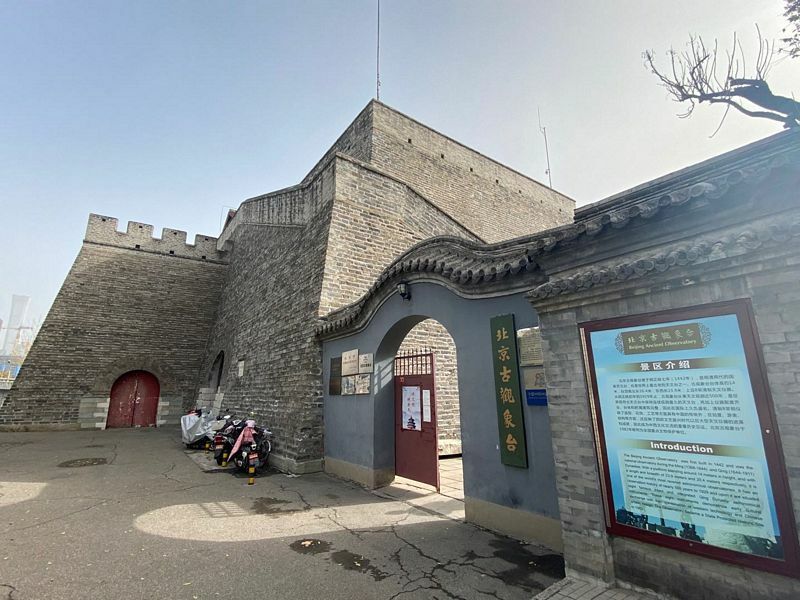 In 1421 the Ming Dynasty moved its capital to Beijing. The massive city walls of the new capital are now a thing of the past, mostly demolished to build the useful-but less defensively viable Second Ring Road. While the Deshengmen Tower (home of the Ancient Coin Museum and City Defence Museum) still stands one of the only other sites is a smaller tower next to the major traffic junction of Jianguomen in the centre of the city. Atop this tower, and visible from the street, are a collection of eight ancient and ornate astronomical instruments. The main attraction in this surprisingly impressive museum.

Initially this observatory was built in 1442, making it one of the most ancient observatories in the world. It operated in this role until 1929, even though there were some disruptions (such as French and German troops stealing the actual observation devices, some of which were displayed at the Potsdam Palace for some years – finally they were returned.). The involvement of European scientists is quite clear here, and explained in a small amount of detail in the exhibits available. Having changed to the western system of computation and measurement there was a great leap forward in cooperation with foreign scientists in the form of Jesuits, who came to China with the aim of conversion but also to share the technology that they brought from Europe. From 1669-74 Ferdinand Verbiest designed six of the devices, in 1715 Kilian Stumpf added one more, and in 1744 the Kangxi Emperor himself ordered the last of the original 8. They stand here now atop the tower, very ornate and complex, clearly of Chinese construction (lots of dragon motifs) and a sign of an era of technological cooperation.

Sadly, there are no signs showing how these instruments were used, so you kind of have to imagine it. But in the large and peaceful courtyard below the tower there are various exhibition rooms that show the history of the site, the ancient Chinese forms of astronomy (and astrology, sometimes at the same time) that pre-date almost all other countries' observations of sunspots, novae, and so on. Also one room about the involvement of foreign scientists. It is all in Chinese with the key points translated into English (some laminated sheets with translations in Japanese, French, and German are also available). There is a lot to learn here, and it is far more interesting and better presented than would be expected. It is easy to spend an hour here, maybe up to two maximum (or bring a picnic and eat it in the courtyard, staff seem to have no objections to this).

The one main negative here, and this is something becoming more and more common in China – at the ticket office you can’t just simply hand over 20 RMB and then go in. You have to open WeChat, scan a QR code, then accept access from an app, then fill out your details (name, passport or ID number) all in a Chinese-only format. It takes a few minutes and is a pointless hassle quite frankly. I asked the ticket attendant why I couldn’t just pay in cash and she shrugged. I asked what would happen if the visitor was from abroad and didn’t have WeChat or WeChat pay. She said that all foreigners have WeChat, which is true for those of us inside the country, but if you are here on holiday then you probably don’t have WeChat pay (you need a Chinese bank account to use it) so this ‘convenient’ system is actually a barrier to non-Chinese non-resident visitors. Hopefully they will sort this out soon enough.

Don’t let it stop you coming to visit this great fun and scenic spot though, wonderful views up some of the major streets of central Beijing are a bonus from the top of the tower nest to the Armillary, Astrolabe, and the other esoteric and ornate devices of science! 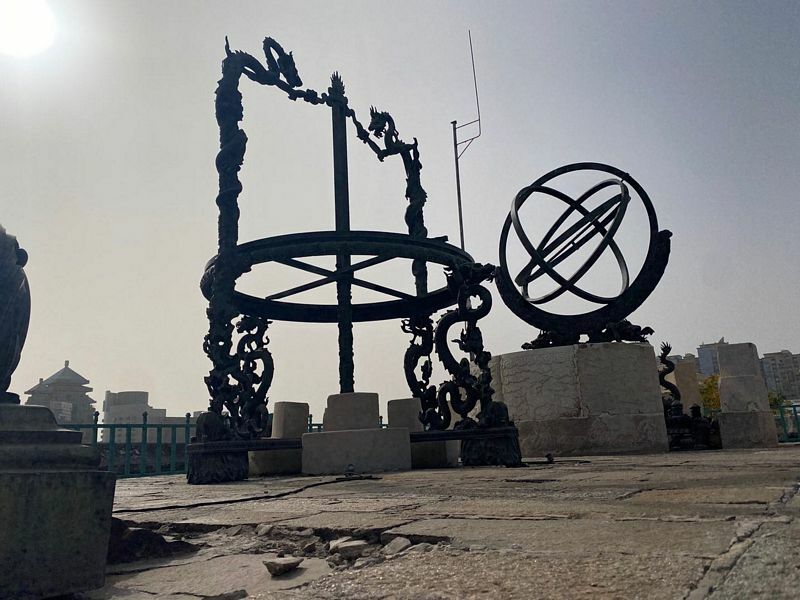