Visiting the relics of a major event

I am currently flitting around Europe waiting for North Korea to open up.  This means watching China closely (by previous standards North Korea opens up 6 months after China). I am staying just outside Paris in a small town called Nogent sur Marne, and came across this little gem of a place….not worth travelling continents to visit, perhaps not even a trek out from the capital, but it is quaint... and has given the ominous description of having been 'a human zoo'...

The Colonial Exhibition of 1907 was the fourth colonial exhibition organized in France. Organized at the Tropical Agronomy Garden of Paris which is at one corner of one part of the wooded park the Bois de Vincennes. The garden was set up to advise the colonies on trial farming, and also to provide them with seeds, seedlings, and cuttings so that they could carry out their experiments on home soil.

The exhibition was a huge success; it was estimated to have had 1.8 million visitors, the French paper L'Illustration echoed this on May 18, 1907: "Parisians and suburbanites flocked... with disturbing realism, these desert guests temporarily fixed under the foliage of the Bois de Vincennes…”.

And this is where it gets interesting…or perhaps worrying…

The colonial exhibition of 1907 is of particular note for having held ‘human zoos’. Several villages were reconstituted; Indochina, Madagascar, Congo, Sudan, Tunisia, Morocco - the major possessions of the French Empire. To perfect the scene, they brought in locals who were offered a contract and salary to come to France to animate these villages. The visitor could see with their own eyes the ‘natives’ who were shown in the film news reels. It was clearly an era of ignoring the negative impact on human dignity.

The most popular scene was likely that of the exhibition of ten Indian elephants which, under the guidance of their mahouts, engaged in various spectacular exercises.

The "Chinese sacred gate" was originally from the Parisian exhibition at the Grand-Palais, 1906 (shown under the glass ceiling) and installed in the colonial garden of Nogent in 1907.

In 1916, during the First World War, a colonial hospital was installed in the colonial garden as well as a mosque. Following the war, it was chosen for the erection of monuments in memory of the soldiers of the colonies who died for France during the First World War.
The atmosphere is certainly not of Europe …perhaps it is worth taking the metro to Nogent le Marne after all…travel to the unknown awaits us! The Guyana Pavilion (French Guiana) converted to a hospital for colonial wounded in the First World War. 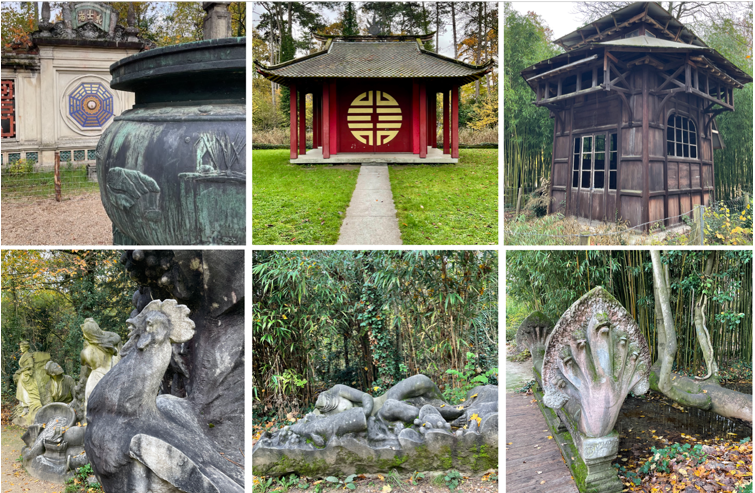