Learn about the Feb 7th 1923 incident 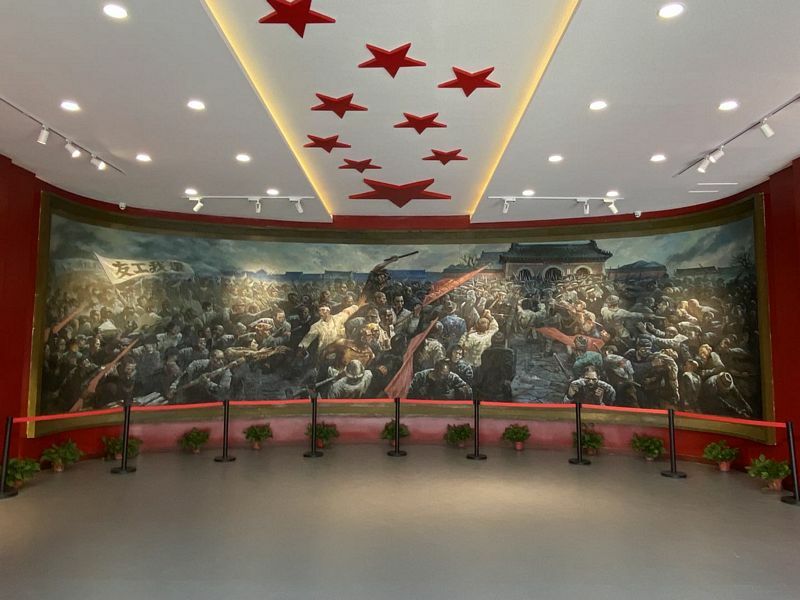 This very interesting museum, dedicated to a little known (outside of China) key revolutionary event (Mao Zedong himself claimed that the working class movement in China started here) is a rather interesting place indeed, and is dedicated to explaining the history leading up to, as well as the events of, the February 7th Beijing-Hankou railway workers strike, which happened way back in 1923, and is considered one of the most important occurrences in the early revolutionary history of China, despite ending in a bloody massacre of strikers and the initial failure of the labour movement which was in its infancy at the time.

The basic background is that railways were being built throughout China in the early republic period, mostly by foreign powers and European companies. The Beijing-Hankou line was a crucial one linking Beijing to the south of the country and was built by a Belgian company with French backing. The workers were treated poorly and unionized themselves to collectively bargain for better conditions and pay, with a strike action taking place in Beijing. This was not met with smiles by the reigning power in the capital at the time, the warlord Wu Peifu, who sent troops to suppress the strike in Beijing and in several other places along the line, with great violence and leading to pitched battles and the deaths of many martyrs.

Various luminaries of the early socialist movement in China had shown up to support the striking railway workers (who, let’s remember, were among the very few actual proletarian groups in China at the time, which was almost entirely an agrarian economy) – from Li Dazhao (the ‘first Marxist’ in China), to a certain Peking University Librarian who would go on to appear on the banknotes to this day. This may have seemed a bit opportunistic, but a veneer of intellectual and revolutionary legitimacy being brought to the dispute was also very much in line with the Marxism professed by these supporters. Sadly, it was not enough against the bullets of Wu’s men.

The Changxingdian Memorial Hall of February 7th Revolution is a tasteful spot, built in the early 1980s and renovated much more recently to beef up the red credentials of the movement’s key personages and to benefit from the recent surge in red tourism in China. In fact, on the day I visited (a Wednesday afternoon) there were two or three groups there taking guided tours, all kitted out in the red flag badges marking them out as a Party cell. This building was actually the site of the General Union formed by railway workers in 1922, and apparently bears the rough shape of the building as it was at that time.

Upon entering the entrance hall, the first thing the visitor sees is a very impressive and rousing painting of workers and soldiers battling it out, setting the scene for what you are going to learn about here. Bounded by red walls, and with totally unsubtle red stars on the ceiling, this is a fine entrance hall. Then the tour begins. The first few rooms are about basic background – so we see the miserable exploited life of the railway workers, building the lines themselves, and the locomotives too. The appalling treatment from the foreign bosses is evidenced in gruesome detail with some photos of executions and some severed heads hanging from a tree, among other grisly sights. There are also some relics from the involvement of Europeans, including some bricks made by the Engels Company (yes, that’s the same Engels who came up with certain theories about class consciousness by observing the workers in his wealthy family’s brickworks in the north of England). We learn about the development of class consciousness among the workers, about how intellectuals came and assisted agitators in becoming aware of their proletarian destiny and organising their union (or actually the 16 unions that existed along this railway line, it was the attempt to merge them into a mega-union that brought the ire of the bosses and the men with guns), and we are introduced to some of the key persons involved here. 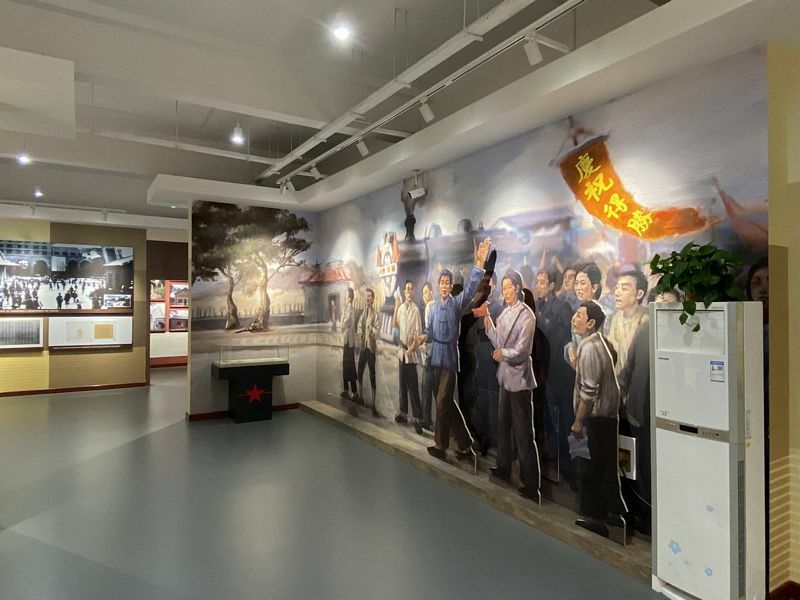 However, just as with many of the now-popular red tourism sites literally everything is in Chinese only. Why no attempt seems to be made anymore to translate any of this stuff is always a bit of a mystery to me – I understand that the audience is almost all Chinese, but it has been customary for decades in China to make museum displays bilingual. I wonder if the ultra-dogmatic nature of much of the explanations makes translation clunky perhaps, but anyway, visitors who can read Chinese, who have someone on hand who can translate, or who have a working smartphone can work their way through this easily enough.

Into the second half of the museum, past a library of books about the CCP and Red History, a snack bar, and a souvenir shop that sells absolutely nothing specific to this site, we finally get to the events of February 1923 itself. They are of course both inspiring and tragic; with the strikers fueled by righteous revolutionary passion, and the warlord’s men fueled by being far more heavily armed. The main massacre in Beijing happened not far from this museum, and there are exhibits about those who lost their lives here of course, as well as some charts about how the strikes disrupted the railway and led to a wider understanding among the proto-proletarians of China that such a thing as mass power and the ability to organise in the face of state aggression actually existed for them. The tragic end of the story is also told in some detail.

There is a final room with a massive screen going over the main points again for anyone who wasn’t paying attention, as well as some clips from the feature film ‘Storm’ which is about the strike and subsequent battle – the rousing speeches delivered to the workers is what is shown on repeat here. 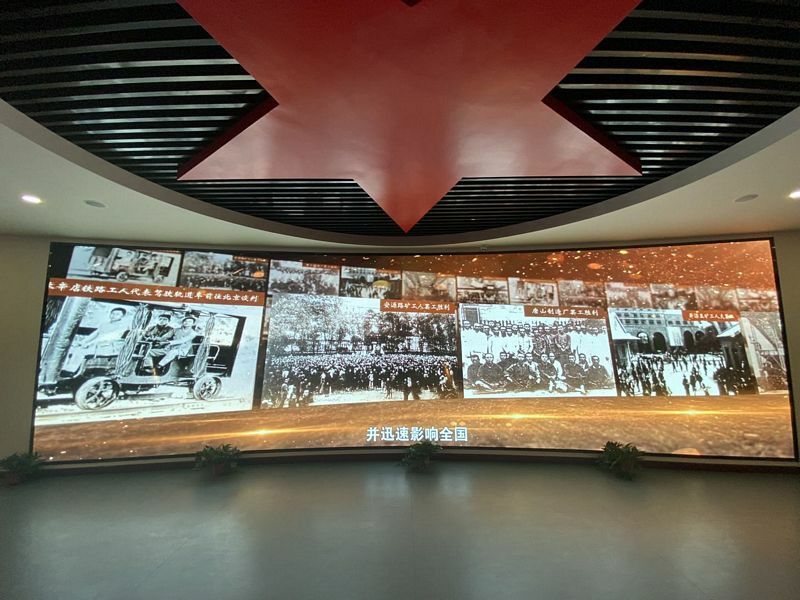 A visit to the Changxingdian Memorial Hall of February 7th Revolution requires around an hour, but allow more if you want to dig in deep and study every caption on every exhibit. It’s a complicated bit of history and also a tragic and important one, but the staff were very surprised indeed to see a foreigner showing up and claimed to me that they couldn’t remember the last time there was one at this site, so it is not one of those popular spots for non-Chinese tourists or visitors at all, additionally being only round three km from the far more well-known Museum to Resist Japanese Aggression, just on the other side of the nearby Marco Polo Bridge (Luguo Qiao)means that anyone looking for their fix of patriotic history, uprisings against evil power, and so on, will be mainly focusing on that other museum. This rather leaves the Changxingdian Memorial Hall of February 7th Revolution in the shade, which is a pity indeed as it is an interesting place, with a good story to tell.

A bonus geek fact for the real nerds among our readers – the handwriting in which the title of the museum is written on the black background above the entrance is that of Peng Zhen; political titan and one of the Eight Immortals of the Chinese Communist Party

Finally, visitors to the Changxingdian Memorial Hall of February 7th Revolution should definitely not leave without taking a walk around the park that the Museum backs onto. This is a pleasant and scenic spot, and also contains a small cemetery for two of the leaders of the strike who were later arrested and executed, so it holds the status of a Revolutionary Site. 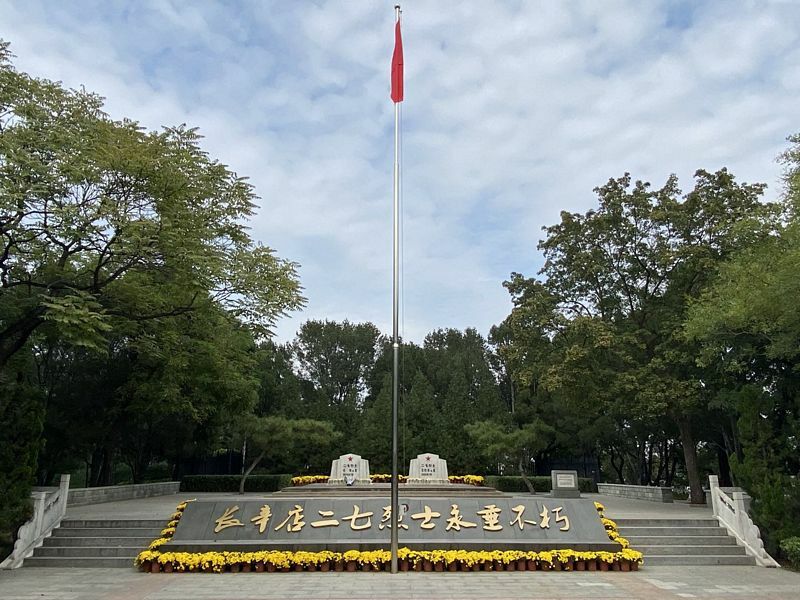