Pyongyang’s Rungrado May Day Stadium, built in 1989 for the World Youth and Student Festival, is often claimed to be the largest stadium in the world.

This isn’t technically true… but regardless, it is a huge structure and can accommodate many tens of thousands of spectators for events held here. It is most famous of being the home of the amazing Mass Games but has also hosted football matches (both domestic and international, mostly in the period of time between 2013 and 2017 when the Mass Games was on a kind of hiatus).

One other event was held here in recent memory though, something so truly bizarre and quirky that even for veteran DPRK visitors it is almost a phantom memory at times, a strange and wonderful event that happened just a handful of times and has been barely mentioned since; Pyongyang Grand Magic! 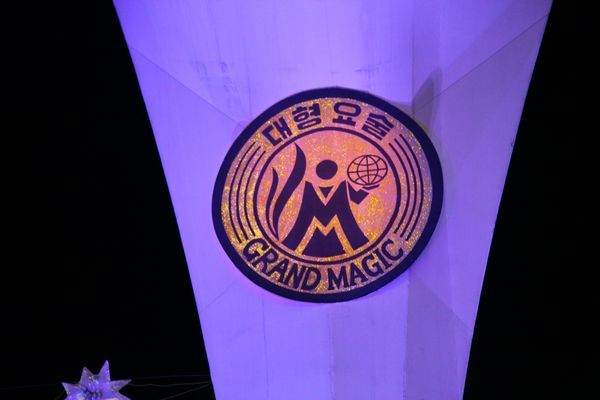 Back in February 2011, travel companies were informed that this event was being held. It wasn’t clear at the time what it would be and much speculation naturally followed. We knew only that it would be happening in April, would run for three weeks with two performances per week (Wednesday and Saturday), and that it would start on April 18th.

Prices were also given, and they were quite hefty, from 80 – 300 EUR. The same as the Mass Games ticket prices.

Due to the venue and high prices, we assumed this would be something on a large scale and excitement levels soured!

The following is the official announcement made to foreign travel companies by their partners in Pyongyang about the event,

The April Spring Friendship Art Festival has been held as a traditional event in Pyongyang, capital city of the Democratic People’s Republic of Korea, in the beautiful spring month of April. In addition to the festival, Pyongyang will host this year a new form of magic show in the May Day Stadium, where the grand mass gymnastics and artistic performance Arirang is staged every year.

A link in the whole chain of magic shows held in a few countries the world over, the magic show, prepared by the Pyongyang Circus, will present aircraft, a large bus, elephants and other giant objects and animals in their form.
Aircraft and a large bus appearing and then suddenly disappearing, elephants and other heavy animals appearing mysteriously, motorcycle performing fantastic skills, magicians floating in the air as if in a gravity-free space-all these will be presented in one large-scale artistic image.

Audiences will enjoy in Pyongyang a multifaceted artistic performance of a new mood, which, unlike the magic shows that were held previously in a few countries, presents a series of numbers in one show.

This magic show is to be performed by Kim Chol, a prestigious magician of the Pyongyang Circus. He is 50 years old this year.

He become an eye-catcher already in his teens, drawing the limelight of the magic circles.

He distinguished himself with his marked individuality at international magic festivals already in the 1980s, enjoying popularity with the audiences.

He is vice-chairman of the Magicians Association of Korea and leader of the magic production team of the Pyongyang Circus. At present he is a world-class producer and performer of pieces of magic.

His masterpieces include Warriors, Girls Reflected in Mirror and A Rich Catch of Catfish, which are well known in the world for the unique skills and splendid conception.

The magic pieces of the DPRK have won more than 20 highest prizes, including the Grand Prix, at the Monte Carlo International Magic Festival and other festivals on ten occasions.

For the past 60 years since its inception in 1952, the Pyongyang Circus has produced 1200 works, winning 70 awards including 36 gold prizes at 38 international circus festivals.

The circus has performed on 35000 occasions in total at home and abroad, including 250 tours around the globe, earning international prestige.

The magic show is slated to open on April 18 (Monday) during the 27th April Spring Friendship Art Festival. It will be held twice a week, six times in all.

Application for tickets is increasing rapidly at home and even abroad.

Pyongyang and the beautiful balmy spring welcome visitors from around the world.

Pyongyang is fully prepared to accommodate every convenience to them.

Performed by the man behind the world-famous Girls Reflected in Mirror and A Rich Catch of Catfish? Er, OK, we must have missed those internationally-renowned magic shows.

The claim that application for tickets was increasing rapidly at home and abroad was a curious one, seeing as this was the first announcement that such a thing was even happening and there was no way to actually apply for tickets at this time…

But we let that go as just a bit of necessary bombast to promote the event, the excitement continued to build! 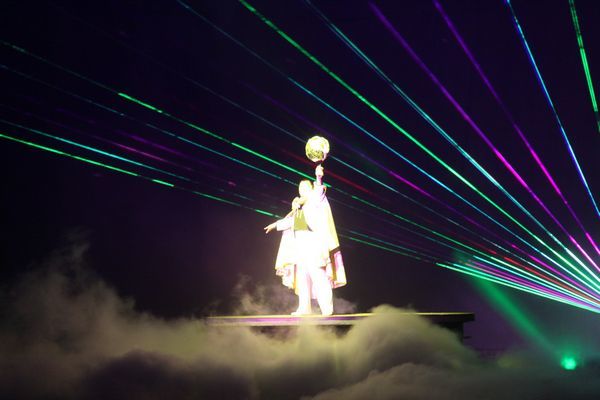 On the 15th April, there was the national holiday for the Day of the Sun. This marks the anniversary of the birth of Kim Il Sung. The Day of the Sun is a major event and this year it was the 99th Birthday. Massive military parades and events (including the first ever public speech by Kim Jong Un) were to follow in 2012, but in April 2011 the DPRK was still led by Kim Jong Il.

Those fortunate enough to have timed their trips to coincide with Pyongyang Grand Magic trooped off to the May Day Stadium that evening, not quite sure what they would be seeing. Upon taking seats, the tension and expectations were palpable with tour guides being asked over and over what to expect and being completely unable to answer.

Finally, the lights dimmed and on screens to the side of the specially-constructed stage an introductory screen popped up. 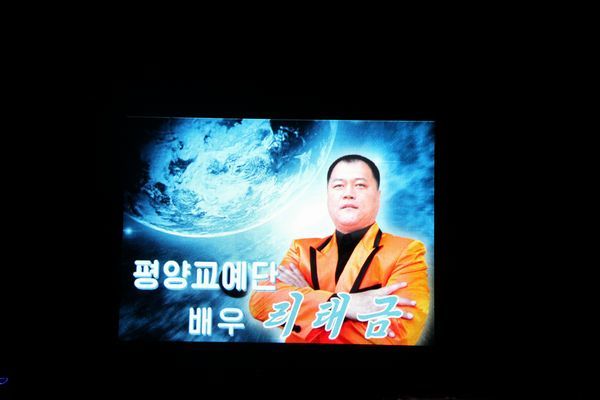 Who is this guy?

That’s not famous magician Kim Chol at all!

That looks like the strongman from the Pyongyang Circus..! Actually… it is him!

This is instead Mr. Ri Tae Kum of the Pyongyang Art Troupe – does he know how to do magic?

This is a strange way to start the event after making such a big deal about who would be the magician involved.

The show lasted about an hour. So, less value for money than the Mass Games itself (usually 90 mins). Plus, there was actually only about half a dozen tricks (sorry, ‘illusions’, tricks are something else).

There was a lot of razzle-dazzle, a lot of showmanship, starting with some fireworks, then someone motorbiking around the inside of a sphere (impressive for sure, not actually magic though, more like a bit of daredevilry and application of physics). 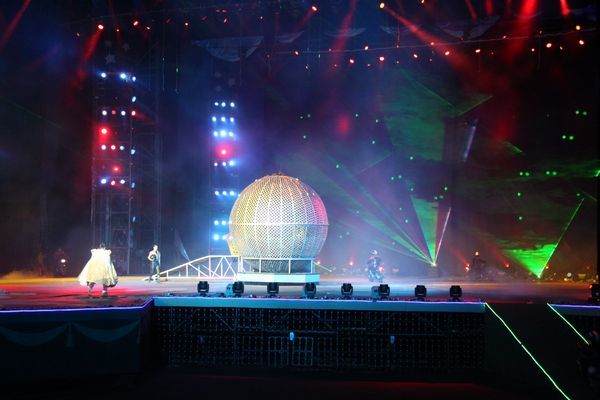 The crowd loved it though, very impressive!

Next up a bus appeared on stage.

When we say ‘appeared’ we mean it just drive onto the stage.

A curtain was lowered and a bit of hocus pocus was done, and the curtain raised; the bus was gone! 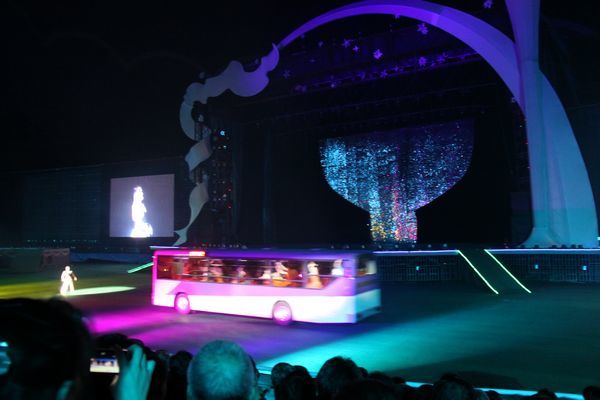 (It has clearly just reversed off the stage while the magician/strongman waved his arms around a bit, hard to do sleight of hand when there is a bus parked on a stage in one of the world’s largest stadiums.)

Next, there was some human levitation, that was well done, and no wires could be seen, so the only conclusion to be drawn is that it was actual magic! 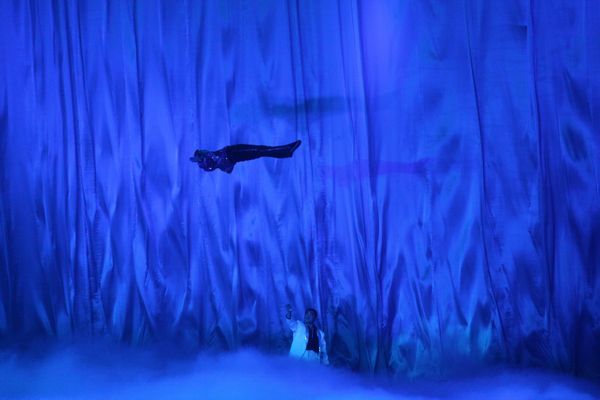 Next a kind of clown show… Again, not actually magical. It was fun, but mainly the same as they do at the actual circus.

Then the screens advised that the next act would feature the appearance of an elephant, a horse, and a bear. OK, then, we aren’t huge fans of the animal shows that sometimes happen in the circus in Pyongyang, but we do understand that such things are common in many places. 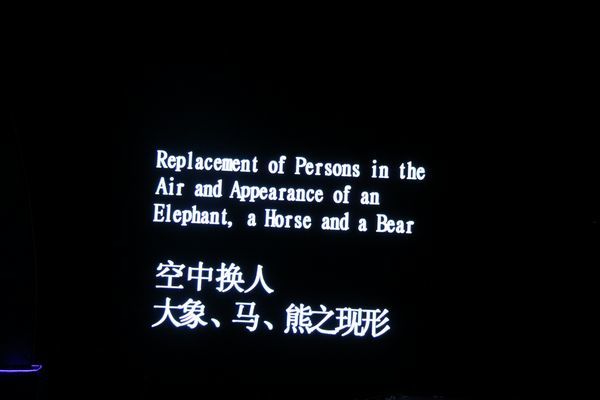 A box comes on to the stage and one by one these animals magically appear. 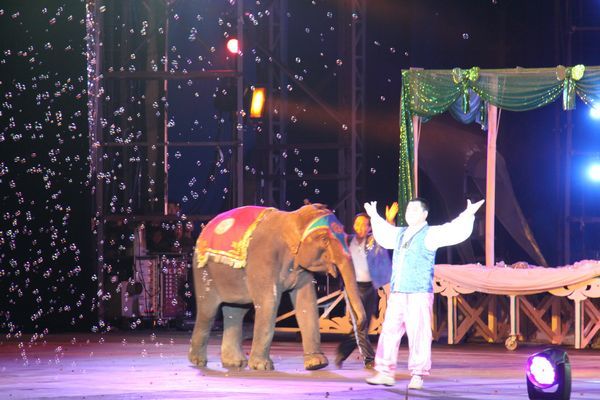 The bit we have all been waiting for!

On to the stage comes a MD500 Helicopter. Some folks has assumed ‘aircraft’ to mean an actual plane, so there may have been a couple of disappointed sighs, just for a moment though. Was the trick to be how a country under sanctions could possibly import not one but in fact dozens of these American helicopters? 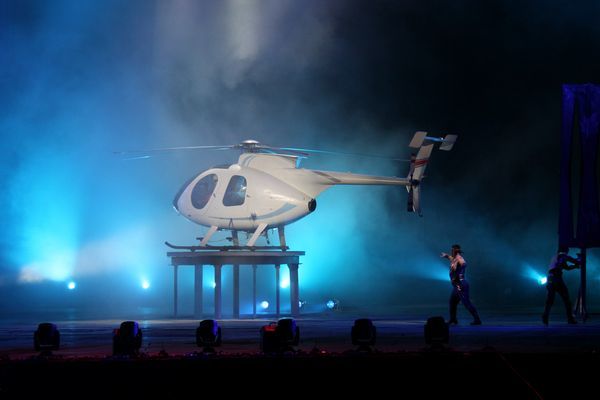 No, that would be a question for another day.

Right now, though, the rotor-blades start to turn. The audience thinks that there is no way it is going to take off…but it does. At this moment, some of the crowd maybe start to think about how even a large stadium is quite small when there is a helicopter flying around the inside of it and start to get a little worried. Some magic pedants probably start to think that there is a difference between ‘flying away’ and ‘disappearing’.

Anyway, a bit more razzle-dazzle, a lot of drum-rolls, and the magician-strongman himself somehow manages to teleport himself from the helicopter onto the stage! Genuine amazement grips the audience. It is hard to see how this illusion was performed, he was right there in the chopper, now he is on the stage! There is no way that could have happened!

Perhaps the whole show was building up to this one piece of genuine magic?

After all, anyone who has seen any of those programs where magicians break their own code to show how mirrors and false doors can hide things in plain sight will have seen through the other tricks pretty quickly, for all the hand waving, fireworks, and raised tensions it was actually fairly pedestrian magic, until this last moment. Maybe the sleight of hand for this one was instead terrifying the crowd due to flying a large deadly machine so close to them?

It is hard to say, but bravo magician/strongman, you really impressed is with this one! 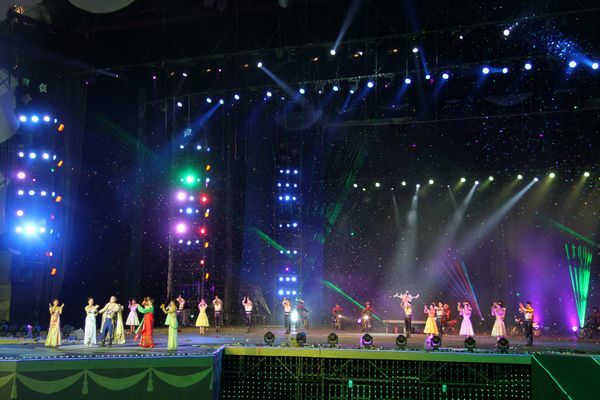 A bit of song and dance to end the show and we head out of the stadium into the cool evening air, impressed, bemused, frightened, and slightly in awe of having seen something just so deeply weird in real life.

Sadly, Pyongyang Grand Magic has never been renewed, never happened again. 6 shows in total and it is now part of history, unforgotten by those who were there. Unforgettable in fact, that’s magic!

KCNA released a 5-minute video to celebrate the opening of the event, which can be watched here. 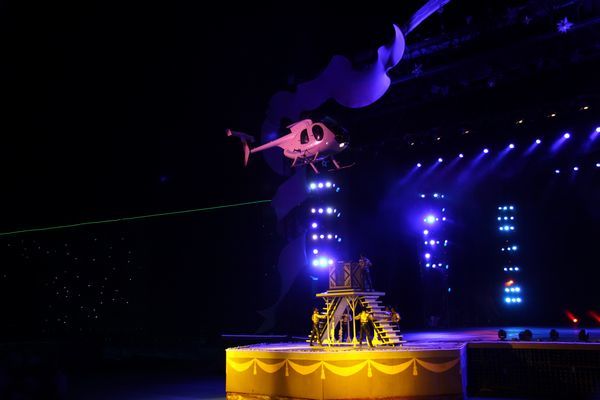