A North Korean romantic comedy involving Taekwondo, as well as many of the must-see sites around Pyongyang.

O Youth is one of those classic feel-good movies. You watch the start feeling you're going to hate it, but very quickly get involved with the characters and the story that's woven around them.

Opening on a shot of the architecturally stunning Sports Street in southwest Pyongyang, we hear narration from a father of five daughters. In this introduction, we learn his daughters are all athletes.

1. Se Ok: A basketball player described by her father as a bit of a tomboy.

2. O Ok: A swimmer, the youngest of the daughters who never want to fall behind her elder sisters.

5. Il Ok: A footballer, the eldest of the girls.

Having learned all about the sporting prowess of his daughters, the narrator mentions there is one overriding issue – finding a match for their only son. 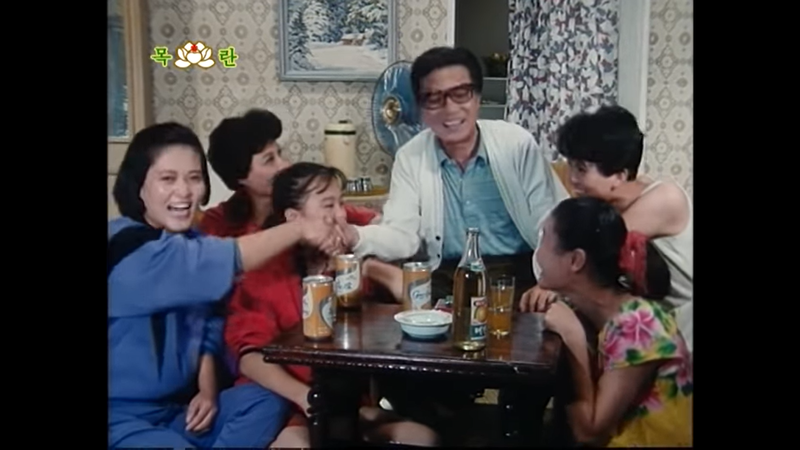 A Visit to the Parents

We find ourselves in the family apartment where the husband and wife are preparing a meal for the imminent arrival of their daughters. The proud father is boasting about the reported success of his daughters, all living in the sports village on Chonchun Street (Sports Street).

His wife tells him not to brag and that he should be devoting his time to worrying about their son's marriage prospects – we learn their son, Ki Ho, still living at home, is focused on getting a PhD and is already 30. In the middle of the discussion, the doorbell rings twice.

"It must be the second!"

The second eldest, I Ok, the weightlifter, arrives for dinner.

Next, the bell rings three times, heralding the arrival of Se Ok, the basketball player, bringing watermelons and throwing them around like basketballs.

Next to arrive, Il Ok, the footballer, followed closely by Ne Ok, the gymnast and O Ok, the swimmer.

It's now we learn that the mother has set each of the girls a secret mission – find a suitable match for their brother.

Il Ok's suggestion is a football teammate, a 25-year-old, although this idea is rejected.

I Ok's suggestion is a weightlifter, also rejected since in the eyes of the mother, if she's stronger than Ki Ho, he'll live under her control.

Ne Ok has a suggestion… but refuses to present it since it's just another sportswoman and will no doubt be rejected.

As they start dinner, the youngest, O Ok, tries to suggest her swimming teacher.

The overarching issue seems to be that the mother doesn't want yet another sportswoman joining the family – throughout the whole discussion, Ki Ho seems uninterested in the prospect, suggesting he's not interested in sportswomen – they're all tomboys. 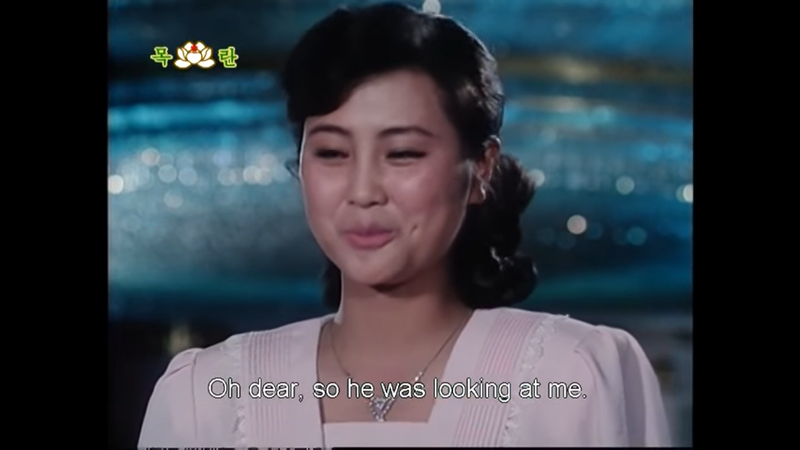 The girl Ne Ok was going to suggest is called Kim Un Kyong, a martial artist. We meet her during her training for an upcoming Taekwondo championship. In order to further her understanding of Taekwondo, she heads to the Grand People's Study House, the typical hangout of Ki Ho.

Ki Ho is there looking for a book which he learns is being used by the beautiful girl in pink. Un Kyong, reading the book, shares a few annoyed glances with Ki Ho. As she leaves, she's told by the librarian that Ki Ho is a researcher on the book she was reading, and so she chases him out of the Study House to quiz him on the book and about the history of Taekwondo.

Back home, the father is plotting with his daughters – he was approached by a journalist who wanted to film the family, and, as part of the programme, the mother and Ki Ho would have to visit Sports Street. The girls hope this will change their mother's attitude toward sportswomen.

We cut, strangely, to Ki Ho and Un Kyong riding a rollercoaster and discussing the history of Taekwondo and Korean boxing. They walk together along the Pothong River as Un Kyong needs to visit the Pyongyang embroidery institute. We learn that she's competing in the World Championships, and the thesis about Taekwondo being written by Ki Ho relies on the DPRK winning that championship. However, Ki Ho wrongly assumes she is an embroiderer.

Arriving at sports street, the parents and Ki Ho, along with a cameraman, are met by the Chongchun Street (sports street) guide.

First, it's off to the indoor basketball stadium to watch Se Ok. Then, one by one, they head to each stadium to watch each daughter compete in their chosen field. After the day of sports, the family head to lunch, where we find out that the mother has still not come round to the idea of a sportswoman marrying Ki Ho. The girls' plan has failed.

Having left lunch, the mother heads outside, where she bumps into Un Kyong. Believing she is an embroiderer rather than a sportswoman, based on what Ki Ho has told her, she's enthusiastic about the potential match and introduces herself.

Off her own back, the mother arranges a date that day at 6 pm for Ki Ho to meet up with Un Kyong.

The Date & The Mix Up

Walking through Moranbong park, the weather takes a turn, and the two take shelter under a tree. Moving to the pavilion atop Moran hill, Ki Ho finds out Un Kyong has to give a presentation about Taekwondo's history, and so he starts to explain it to her.

Keen to learn more, Ki Ho gives her all his papers on the subject.

The mother later bumps into her friend, who saw the two walking together. In passing, her friend mentions that Un Kyong is not an embroiderer but a taekwondoist. A considerable surprise given her aversion to sportswomen.----

Later that day, Ki Ho is interrogated by his mother, who thinks he's been seeing two girls simultaneously – Un Kyong and this mysterious taekwondoist.

The father supports the match with the taekwondoist; the mother supports him marrying the embroidered. We, the audience, know that they are one and the same!

Ki Ho denies ever meeting a taekwondoist – so his mother heads out to meet Un Kyong to find out more. As they walk through the Mansudae Fountain Park together, the mother goes on a long rant about how Ki Ho hates sportswomen because of his sisters – unaware that Un Kyong is, in fact, a taekwondoist.

Un Kyong, clearly upset, says she clearly isn't the girl they're looking for and asks her never to meet her again.

Un Kyong returns to the sports village where she meets up with fellow Taekwondoist Ne Ok, Ki Ho's sister. She talks about this historian that she met but that he thinks she's an embroiderer.

"What a coincidence," says Ne Ok, explaining her brother is also a historian dating an embroiderer. It's now that Un Kyong realises Ne Ok is the sister of Ki Ho. Glancing at the papers on her desk, Ne Ok realises that Un Kyong is, in fact, the girl. So, they rush off to tell their father.

Fully supporting the match, the father meets with his daughters to try to engineer the romance into marriage.

The plot slowly forms; they plan to organise for Ki Ho to watch Un Kyong's exceptional Taekwondo skills in an attempt to charm him and have him fall for her. The daughters arrange for some other taekwondoists to pose as hoodlums and pretend to attack Un Kyong only for her to defend herself heroically in front of Ki Ho.

That evening, Ki Ho is walking with Un Kyong when the men emerge from the bushes – slightly clumsily. Accidentally resulting in Ki Ho walking backwards away from them and falling in the Pothong River – in response, Un Kyong takes them down with her Taekwondo resulting in a very confused and wet Ki Ho.

She finally admits to Ki Ho she is a Taekwondoist merely instructing workers at the embroidery institute.

Un Kyong thinks she's blown her chance and humbly concedes that they may never meet again, although Ki Ho says they should work together on the thesis and that he shouldn't worry about his mother's opinion on sportswomen.

Ki Ho returns home and tries to explain the situation to his mother; however, he gets frustrated and tells her to stop poking her nose in his business. She now believes he's broken up with the embroiderer, Un Kyong, to pursue this taekwondoist. 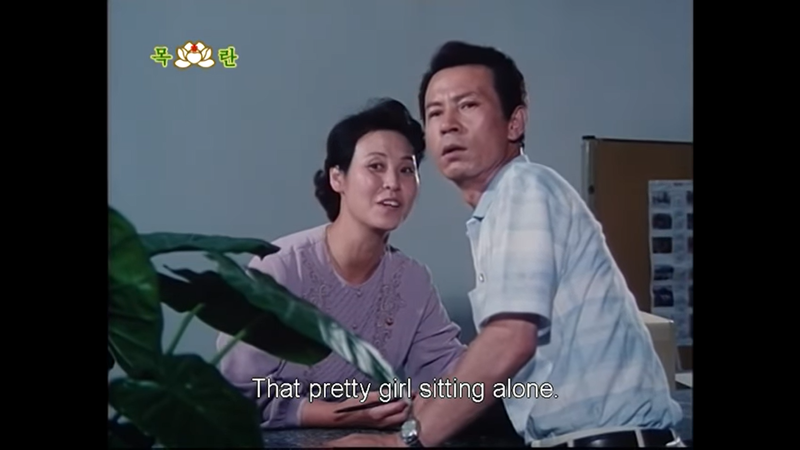 Meeting once again, Ki Ho and Un Kyong discuss his thesis and, after a long speech about how he should rewrite the preface to embody the spirit of the Korean nation and the Great Leader's impact on Taekwondo, she says that now the thesis is done, they have no reason to meet again since she isn't an embroiderer.

The response from Ki Ho; "Can't I love a taekwondoist?"

They agree to discuss it after the World Championship, and she walks off. However, she doesn't go far, ending up on a bench on the bank of the Taedong River. Ki Ho comes over and says he can't leave her alone this late in the evening.

Un Kyong talks about the importance of doing her country proud through Taekwondo, and Ki Ho reveals that he never thought he would allow himself to fall in love before he finished his studies.

Ne Ok has been tasked by her mother to find out as much as she can about this Taekwondo girl; since she already knows the girl is Un Kyong, she informs her mother that Ki Ho will be meeting this mysterious sportswoman that afternoon at the Taekwondo Hall.

Upon arriving at the hall to watch the world championships, she sits down next to her son and interrogates him about the girl he's dating – they, Un Kyong, steps out into the stadium, much to the surprise of the mother who finally realises Un Kyong is a taekwondoist.

After a montage of Taekwondo, we see Un Kyong sparring with another Taekwondist, which greatly impresses the mother – after her victory in the arena, the mother meets Un Kyong to congratulate her and give her blessing to the relationship.

As a follow-up, the mother shifts her perspective on early marriage, telling her daughters not to prioritise marriage until they've each achieved something. 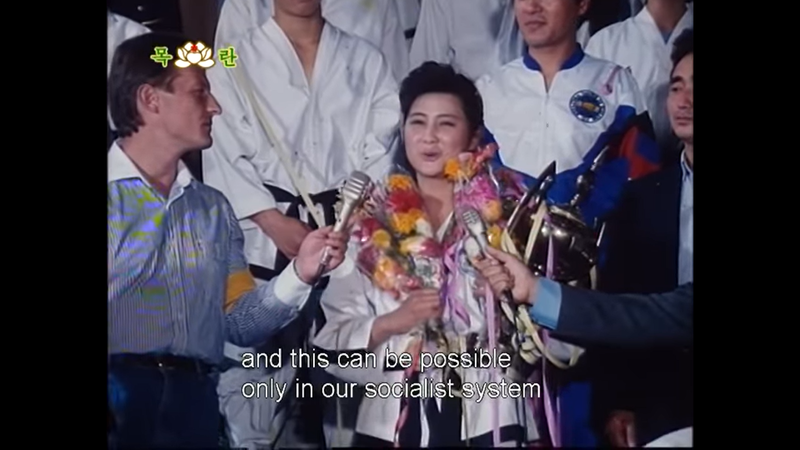 I have to be honest and say that O Youth is one of the few North Korean movies I have watched on numerous occasions. Not because I am a diehard O Youth fan but because it is one of those films that has been regularly shown to tour groups when we visit one of the cinemas in Pyongyang. I do like the movie; it may well be a bit of a propaganda piece, but it keeps me entertained, still raises a smile and a laugh, and I leave the cinema feeling happy about life.

On the many occasions I have watched the movie (more than I can remember), in cinemas in Pyongyang with my local team - drivers, guides and tour videographers, all together in the dark of the cinema when the movie is rolling, I always hear a chuckle and see the smiles of a contented local audience illuminated by the silver screen - always a special feeling, and one that watching this film even now evokes.