The Forbidden City in China is one of the must-dos in Beijing. And that's for a reason!

Visiting the Forbidden City, otherwise known as Palace Museum, can be a little tricky, though. Despite how many foreigners visit it annually!

So we went ourselves and put together this guide of all you need to know, what you should expect, and how to make the most out of your visit to the Forbidden City, Beijing.

LOCATION: Right in the very middle of Beijing. It’s the Forbidden City! The official address is 4 Jingshan Front Street, Dongcheng District, Beijing. But nobody needs an address to find this place! The nearest subway stations are Tiananmen West and Tiananmen East (around five minutes away on foot). Either will get you to the Forbidden City. 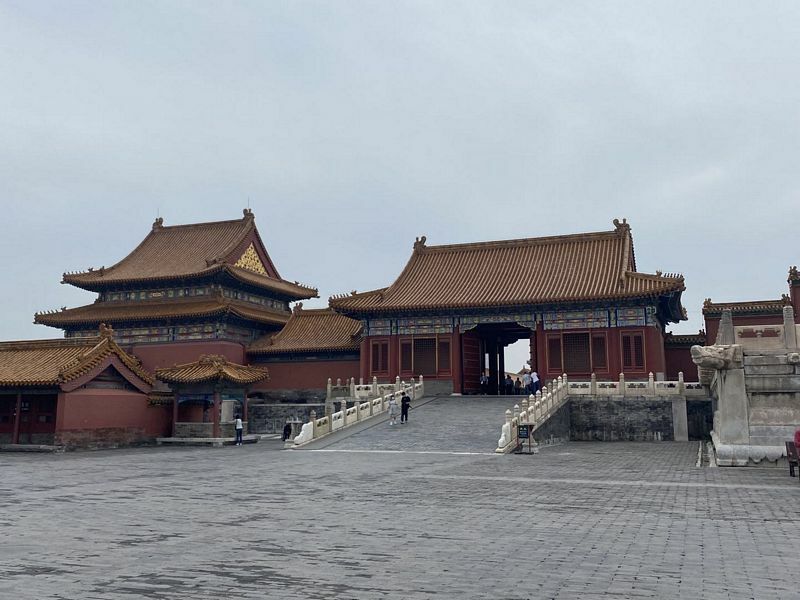 Just What Is The Forbidden City?

(Not a city. Nor forbidden.)

The Forbidden City (which is not a city, nor is it forbidden – these days at least) is the former Imperial Palace of the later Chinese Dynasties. This is the most well-known and heavily visited museum that appears on the Museums of Beijing list, and one that almost every visitor to Beijing will be including in their itinerary.

Where Is The Forbidden City?

The Forbidden City is situated in the geographical heart of Beijing, directly north of Tiananmen Square and Tiananmen Gate, and directly south of Jingshan Park.

It is located at the nexus point of the east-west axis of Chang’an Street and the north-south axis of the city as well.

The Palace Museum is technically the museum operated inside the Forbidden City. Although, the terms can be used interchangeably in almost all cases.

How Big Is The Forbidden City?

Big. The Forbidden City is so big, in fact, that it is the largest museum in the world.

The whole Palace Museum is spread over a massive 720,000 square meters. It is the largest museum in the world, and includes nearly a thousand buildings.

There is a future plan to have 95% of the palace open to the public. So, more and more areas are opening all the time.

The Palace itself dates from the early 15th Century. It was built from 1406-20 in the Ming Dynasty. There were previous palace complexes of course, but the Forbidden City we see today is very much a Ming/Qing creation.

It was in constant use from the time of the Yongle Emperor until the overthrow and abdication of Pu Yi, the Last Emperor. He was then evicted from this site in 1925.

This is when it first initially opened as a museum. 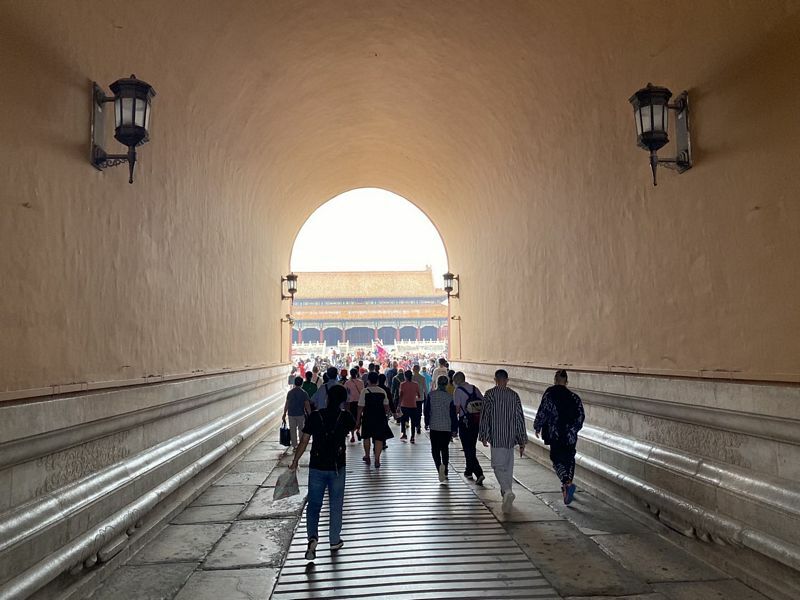 Visiting The Forbidden City - ALL You Need To Know.

Of course, I had been here before.

Just as more or less all first-time visitors to Beijing make sure to include a visit here. I did so first in the summer of 1999, and came again in 2001, and then in 2002. Since then, I have not set foot in the Forbidden City. Largely because it is daunting in terms of scale and the time needed to do it properly.

But as part of this Museums of Beijing project, I knew I needed to come again. So I got in touch with Jeremiah Jenne of Beijing by Foot, who leads amazing walking tours around Beijing.

Enhanced by his encyclopaedic knowledge of the city and Chinese history, he generously accompanied me on a private tour which focused on some of the parts of the Forbidden City which had opened since my previous visits.

There are large numbers of people of course and the majority will be in local tour groups. Most ply a central route from the south to the north of the complex and taking in mostly the highlights.

These are amazing of course, but there are gems aplenty in the side alleys and gardens of this place, as I was to find out.

Entrance to the Forbidden City

The entry point for all visitors is the south gate. The normal way to get here would be to start in Tiananmen Square and walk under Tiananmen Gate and the panoptical visage of you-know-who to the expansive entrance area.

You register for your ticket at one of the booths. Then, pass through a couple of checkpoints to start the visit.

Jeremiah and I entered instead at Donghuamen (the Gate of Eastern Prosperity). This lies to the southeast of the palace. Walked around part of the moat to the main entrance. This was simply for convenience and to avoid the multiple checkpoints needed to go into Tiananmen Square.

This is a good tip for anyone wanting to park a bike nearby and to see a bit of the moat area that is usually skipped.

The southern part of the Forbidden City is dominated by the large squares and ornate massive gates and halls that everyone has seen at least pictures of. Places the emperors performed their ritual roles, reviewed troops, celebrated significant occasions, received dignitaries, and so on.

Working Through The Forbidden City

These are the iconic places dominated by the Hall of Supreme Harmony in the center of the palace.

This is where most visitors will be found, They make their way gradually north, and take in the highlights. This is very much worthwhile, and the opportunities for amazing views and photos will satisfy any visitor at all. No matter how many times they have seen curved roofs and temple and palace halls before! It is a genuine marvel of the world and not to be missed.

But the side parts, with far fewer visitors, are something that should be sought out too. They are (as Jeremiah put it very well) how the royal residents of this place would have experienced the palace as their home and residence. 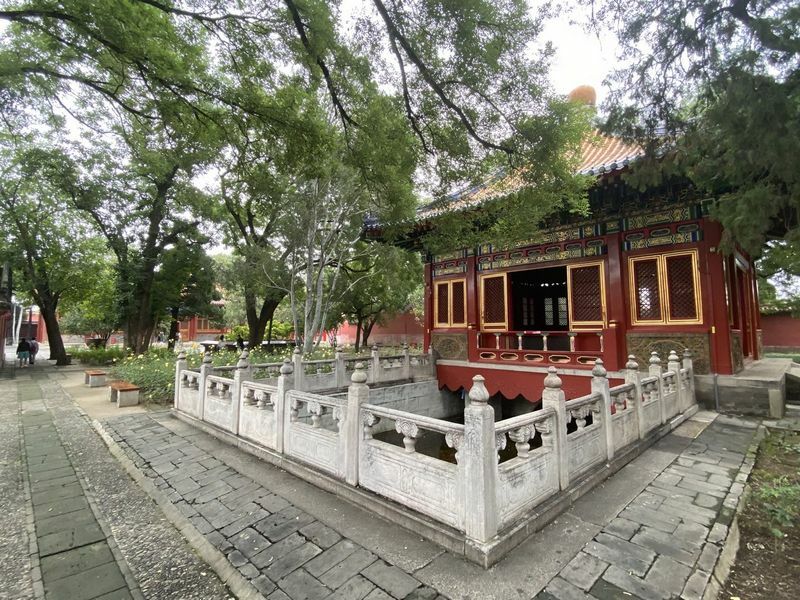 Inside The Forbidden City

Smaller gardens, courtyard complexes, temples, offices, and more. This is where the folks who lived here spent much of their time. Rather than the ceremonial times in the main areas.

And it is much more of a ‘city’ in these areas too.

With small parks, alleyways, homes, living quarters, and much more... I won’t go through all the buildings we visited. But, highlights included the residence of the Chongqing Dowager Empress (Qianlong’s mum), and the small building holding the Grand Council of State. This was the kind of private intelligence unit of the emperor and his closest advisors.

The rear of the city, the north side, is much denser in terms of buildings than the southern part. With more alleyways, residences, administrative areas, and so on. This is much more akin to a city too than the ceremonial part of the Forbidden City. While the main south to north route runs through the middle, still it is very advisable to branch off to do more exploring. It is fair to say that no one visitor on one single visit will be able to see it all or learn it all.

But you can just do your best!

The exit of the Forbidden City is at the north end. Or, one can exit back at the main entrance. You can also do as we did - back out of Donghuamen or another gate.

Finishing at the north side gives one access to the nearby Jingshan Park and an amazing view over the Forbidden City from the top of the artificial hill there. So, it is recommended for those looking to finish a visit here with such a sight.

Group Tours of The Forbidden City

Many local group tours of the Forbidden City will smash through the place in merely an hour. This is barely enough time to slowly walk the 1km from the entrance to the exit.

Even those in a rush will need more than two hours to scratch the surface. While those with a deeper interest and a bit more energy could spend four or more hours here easily.

If you’re making a visit and aiming to be there for a while, then seek out a coffee shop (there are a few, and they are not priced as predatorily as they could be) and bring some food (or try one of the restaurants) as you’ll need the energy.

Also, consider a guided tour. There is just so much history. So many personages. So much to know about the place that it can be daunting without some proper understanding of context.

Jeremiah is very much the man to go to for this and I can recommend his walking tours without any reservation whatsoever. For the beginner or for those who think they know it all already!

The Palace Museum/Forbidden City is rightly a canonical site on the tourist route around Beijing. And deservedly so. It is an architectural marvel containing permanent and temporary exhibits which are curated to international standards (plenty of detail in English too, translated perfectly). A wealth of attractions for any level of interest. And a sense of being in a place of great importance and significance.

It is true, of course, that much of the treasure of the city was carted off to Taiwan with the retreating KMT back in 1949. But the idea that this left the Beijing Palace Museum an empty vessel is very much incorrect.

There is a vast amount of wealth in terms of art, porcelain, militaria, and much more still here and on display. Enough to impress and exhaust anyone in my opinion.

So, if you are visiting Beijing, or if you simply haven’t been there in a while, the Forbidden City is one that should be on your list!

Just allow enough time to walk around the whole place, and don’t just stick to the main path up the middle!

Be sure to ask him the story of why there is an arrow embedded in this board in one of the internal gates of the Forbidden City!