Considering the distinctive features of the flag of Kazakhstan, this is somewhat surprising.

The vivid light blue is enough to hold it in memory! 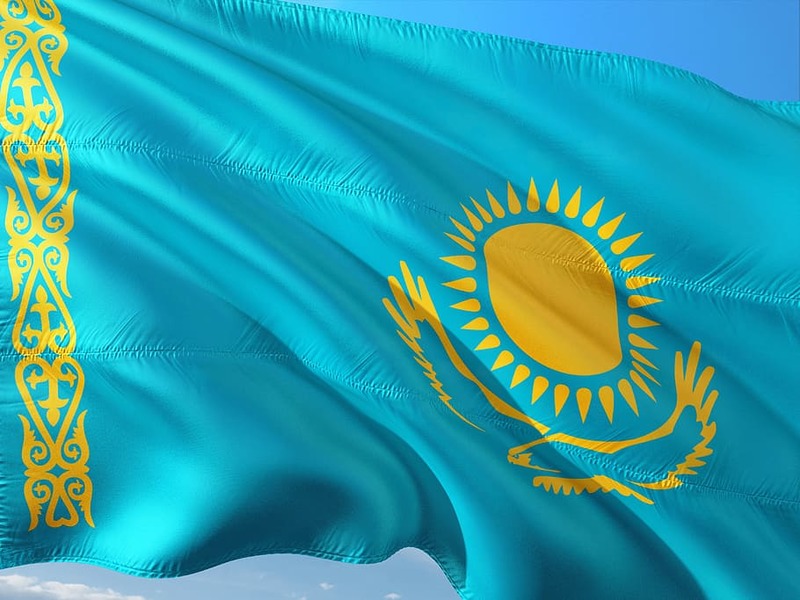 History of the Kazakhstan Flag

Kazakhstan is by far the largest country in Central Asia, the giant of ‘the stans’ and the easiest country in the region for most people to visit.

Gaining independence from the USSR on 16th December 1991, the nascent country found itself without the necessary symbols of nationhood.

By early June 1992, a design had been agreed upon for the Kazakhstan flag; a sky blue background with a shining sun and eagle occupying the centre of the flag and a stylized banner running from the top to the bottom of the pole-side of the flag.

The Kazakhstan flag may not be one of the world’s most well-known, but it is one of the quirkiest; with a unique combination of a rarely-used colour and a striking gold design.

Symbolism of the Kazakhstan Flag

As with most national flags, the choices of design, colour, and pattern is loaded with symbolism (sometimes genuine, sometimes somewhat spurious and tenuous!).

This is no different for the flag of Kazakhstan!

For the Kazakhstan flag, the choice of the sky-blue background is associated with the seemingly endless steppe that makes up most of the country.

It also supposedly speaks to the unity of the various cultures and people’s who make up the Kazakh nation (one of the most ethnically diverse in the world), although a sky blue flag representing the sky in a country full of views of the sky is probably the simplest and most self-evident explanation.

The eagle on the flag of Kazakhstan is a Steppe Eagle. This is a bird seen commonly and widely across the country.

This bord has served as a symbol of many Kazakh tribes for centuries and, like most birds represented freedom from barriers and opportunity to soar above the constraints of others.

The sun of the Kazakhstan flag, which the eagle soars beneath, shines in full and represents natural abundance and wealth.

The ornamental column, made up of the national pattern Koshkar Muiz, also speaks to the country being the continuation of the Kazakh people, even if it may be the first recognised state of its name

Where to Find the Kazakhstan Flag

On a visit to Kazakhstan, you can find the flag of Kazakhstan in many places.

Not just the usual government and administrative buildings, but also on clothes, souvenirs & tourist tat. And the most commonly-eaten locally-produced chocolate bars from the amazing Rakhat Chocolate Factory in Almaty – a perfect souvenir, and a delicious treat too!