Before and after photographs from our visits to North Korea since 1993.... and a few unusual collections thrown in too

"How have things changed"? is one of the most common questions we are asked about our decades of work in North Korea.

It is a complicated question with many possible correct and true answers, some of them quite contradictory too!

It has changed a vast amount, and it has remained in many ways deeply and structurally unchanged too.

There are causes for both optimism and sadness, but complex emotions and difficult explanations are simply part fo the experience of North Korea. In this series, we will look at a few examples of before and after, of how things have grown and advanced, and how some things remain identical year after year.

This is a broad theme but one that does tend to pique the interest of anyone with even a casual interest in North Korea, so read on for some snippets of info and experience from Koryo Tours - your experts in travel to North Korea!

Approximately 20,000 schoolchildren make up the backdrop using painted books as individual pixels. Individual schools each take a vertical section to practice and come together in the May Day Stadium to rehearse. The hand-held books can contain up to 150 pages for the varying backdrop scenes during the performance.

For any scene containing the Leaders' image, the children shuffle closer together so that when the image is revealed there are no obvious gaps.

Check out this Mass Games video!

Photographs of the signing of the Korean Armistice Agreement on July 1953 in the Armistice Signing Hall, hastily erected just for this ceremony.

Then the same spot in 2014 with a Koryo Tours group.

The armistice brought about a cessation of hostilities of the Korean War. DPRK and the United Nations (presented in the North Korean narrative simply as "United States") both signed but South Korea, intent on reunification, did not. Since the armistice is a military agreement and not a treaty between nations, the war still technically continues. More information on the DMZ. 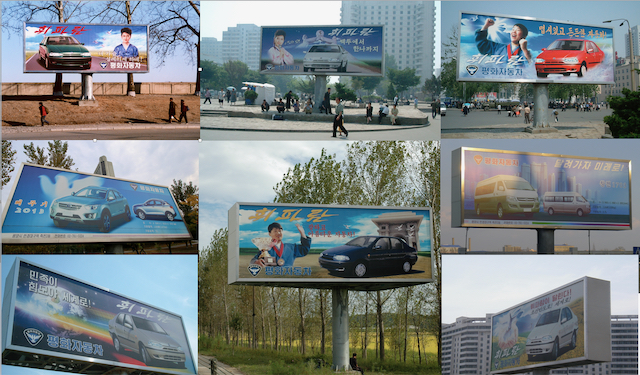 A selection of billboards promoting Pyeonghwa Motors (Pyeonghwa is the Korean word for 'peace') from 2003 to present.

A joint venture established in 2000 during the ‘Sunshine Policy’ (a time when the South Korean government made great efforts towards a friendlier approach to their Northern cousins) between the Unification Church (the Moonies) in South Korea and the North Korean Ryonbong General Corp. The joint venture produced small cars under licence from Fiat and Brilliance China Auto.

From 2013, the company has been fully owned by the North Korean state. As part of the initial agreement Pyeonghwa was allowed to put up 5 billboards around Pyongyang (sometimes featuring North Korean famous singers or athletes) and they remain the only advertising in the country.

These parades were the biggest we have attended.

The first photo was taken on the very first-ever Koryo Tours trip made in 1993 from the podium on Kim Il Sung Square to review the parade marking the 40th anniversary of the end of the Korean war. In 2013, we witnessed an anti-US parade - sadly no great changes in relations between the two countries since the end of hostilities in 1953.

If you look closely you can see the portrait of Kim Il Sung has been removed (now it is alongside that of Kim Jong Il at the top of the square). 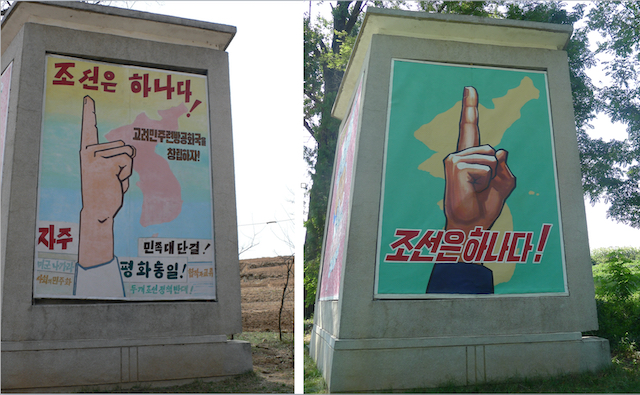 A teaser for the next edition of our 'Before and After' blog entries. Versions of this particular poster have been seen many generations of tourists - in a part of North Korea where things remain tragically fixed and only the artwork changes over time.

More coming on the 'Before and After' topic soon!