A relaxing area made up of a sandy beach and picturesque lake. With accommodation and health treatment options on offer to guests 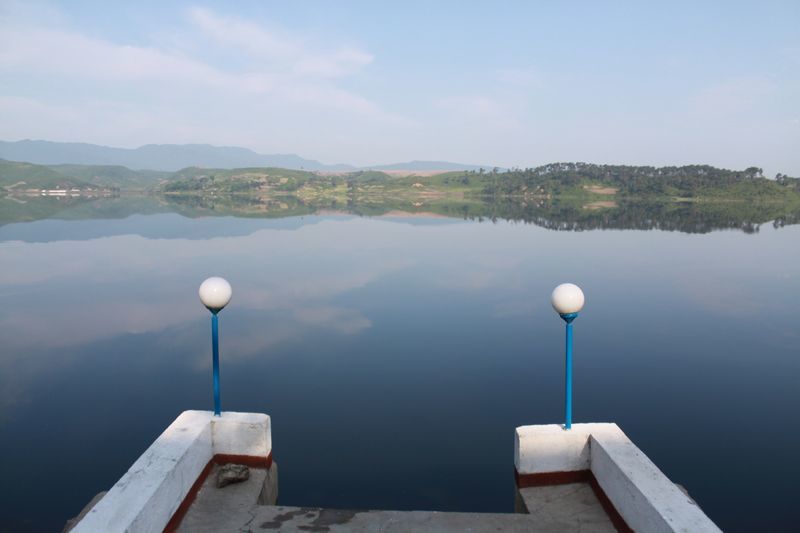 Located on the south-east coast of North Korea, around halfway between Wonsan and Mt. Kumgang, and just a few hundred metres from a sandy beach on the Korean east coast, Lake Sijung is a 3 square km brackish lagoon, surrounded mostly by trees and with a small and quite fun hotel, the Lake Sijung Motel, on its shores too.

Once part of the sea itself (the East Sea of Korea, known to many as the Sea of Japan), a sandbar built up over the years and formed this lake, this bar solidified and now the highway between Wonsan and Mt. Kumgang runs this way, just a couple of minutes from the highway brings visitors to this pleasant area, ideal for a short stop or for an overnight stay and health treatments. Health treatments you say? Yes indeed! This is what the lake is known for actually, while there are fish here to be caught, and plenty of scenic views (including of some of the 7 small islands in the water itself), it is instead the stuff at the bottom of the lake which is considered to be blessed with almost panacea-like qualities.

As a DPRK-published guidebook puts it:“…at the bottom of the lake lies quality mud of 4-5 cm thick which is used for medical treatment. It contains iron sulfide, calcium chloride, magnesium and crystal hydrate that are effective for cutting the nervous system disorders, digestive troubles, women’s diseases, bronchitis and dermatitis, etc.”

Treatments involving this stuff can be taken at the Lake Sijung Motel, usually they would be advised for anyone feeling a bit tired as application of heated-up mud is quite relaxing. Although it does stink a bit!

Actually it isn’t really mud at all, it is in fact sludge; a mixture of mud, decaying matter from the pine trees that proliferate in this area, plus of course the fish that have seen their days out in the lake without being caught; hence the pungent aroma! But whatever you call it this magic brown stuff is what draws some folks here for a bathe and a wallow in it – enjoy the treatment, whatever ails you!

Back to the actual sea coast though, just a few minutes’ walk from the motel and the lake itself, this is the Sijung Beach, there is a very DPRK-Style concrete beach house here with a restaurant/café, shower area (that works sometimes) and access to a golden sandy beach, a lovely spot which, being around 45km from Wonsan, is almost always completely empty.

Swimming is allowed here as the water is usually flat, there is a shipwreck too (well, abandoned fishing vessel really) a little down the beach, and some rocks that one can swim out to as well. It does lack any locals though.

A better option for sea swimming would be the beach in Wonsan city, although that is technically segregated into a foreigners section and local section the reality there is that one just has to pay a bit more to use the foreigners beach (being that it is almost always completely devoid of foreigners after all!), but for a peaceful place, a good stop on the way between two major sites, or just a peaceful dip in either seawater of lake sludge the scenic Sijung area is a worthy addition to your visit to the DPRK.