Location: no address. It is right in the middle of Tiananmen Square. The very centre of Beijing. Nearest subway station is Qianmen, but Tiananmen East or Tiananmen West will be good enough, too. 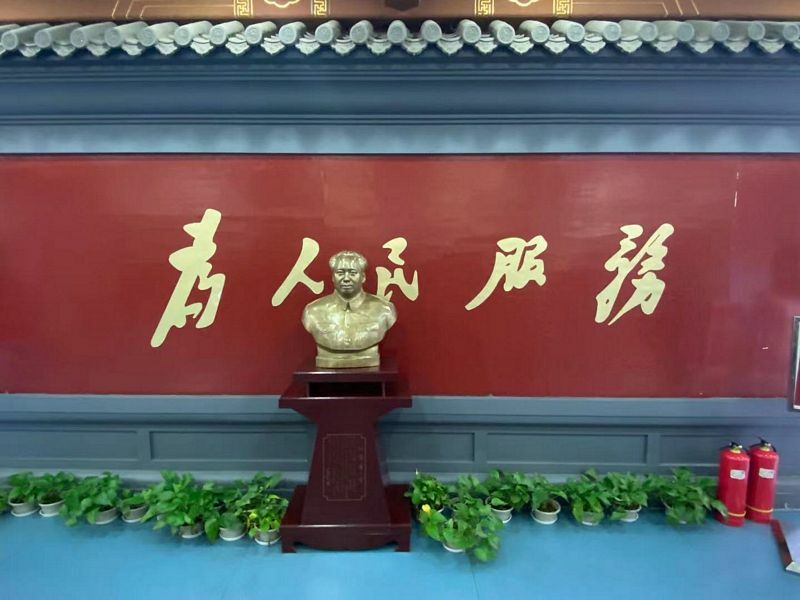 Mao Zedong, Chairman Mao – Founder of New China, Chairman of the Party, ‘Great Helmsman’, the guy who is literally on the money here in the People’s Republic. No figure in 20th century China is larger than him, and his legacy (and a good part of his leadership style) projects itself into the present day too. Everyone in China knows who Chairman Mao was and is, and pretty much anyone considering a visit to China will have at least picked up a few bits of information here and there.

There isn’t space here to go into the details of Mao’s life, many a book has been written about this; from the hagiographies that dominate in China, to the hatchet jobs that are more common in the outside world. Mao’s life was a long one, and one in which he had enormous power in the later decades; power wielded both against and in the name of his own people. Regardless of the devastation of some of his signature policies (the ones that get somehow overlooked a lot in China), he is the big man, the founder, and the guy who so many thousand people come to visit every day, despite his death in 1976.

The Mao Zedong Memorial is not his old house, and not really a museum at all, it is his mausoleum and it sits right in the middle of Tiananmen Square, which in turn sits right in the middle of Beijing, capital of the ‘Middle Kingdom’ of China. So, Mao really does occupy the centre-ground as it were, something he politically never did during his life!

While bookings and reservations for almost all museums in Beijing are supposed to be made these days, the reality is that you can simply show up to almost all of them and get in on the spot, but this is not one of those places. Reservations for certain time slots have to be made via a WeChat mini-app (and the fact that almost all foreigners not resident in China will not know what that term means doesn’t change this fact). So anyone coming to Beijing and looking to visit Mao will want to plan a little ahead and maybe ask someone in their hotel or a local contact for some help. Anyway, the booking is free, so it isn’t very difficult for anyone who knows how to use WeChat (everyone in China) to do. 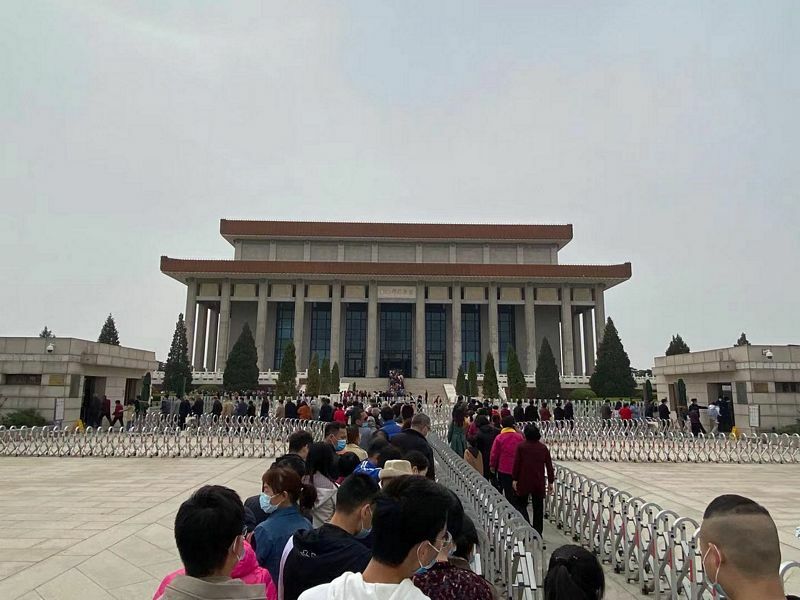 Arrive early, as there are a few security points to get through, and Tiananmen Square is vast too. Then join the worrying long line of people. ID card or passport in hand (you must have this, no way you are getting in without it). The line moves at a shuffling pace so don’t worry, it will only take a short while. Once you snake your way to the front of the columned and square looming mausoleum building itself, you’ll be told not to take any photos. Still, you can carry a phone inside (your booking will most likely be on there), but nothing else (cloakroom is on the east side of the square, be ready for a long queue in there too!) but there are plenty of guards looking out for sneaky photo-takers; don’t do it!

The final part of the line passes a few flower sellers, 3 RMB each is a very good price for these yellow flowers, but you are supposed to present them to the Chairman, so don’t plan to take them home (buying is optional, most people on my visit didn’t bother).

Entering the front chamber, there is a space for the piles of flowers to be presented, then a very North Korean scene with a white marble statue of Chairman Mao backed by a massive woven backdrop of some heavenly misty mountains, the line continues its inexorable shuffle past this scene and round a corridor into the small main chamber. Here lies the bier itself with the body of Chairman Mao on display. There is no weeping or wailing here, just thousands of people slowly shuffling by. The glass casket features the body covered with a red flag, the head is exposed and glows with a very strange orange and waxy light. This is presumably beamed from above, but it does seem to emanate from inside, giving a very inhuman quality to the face of the guy who is responsible for the country he lies at the centre of. 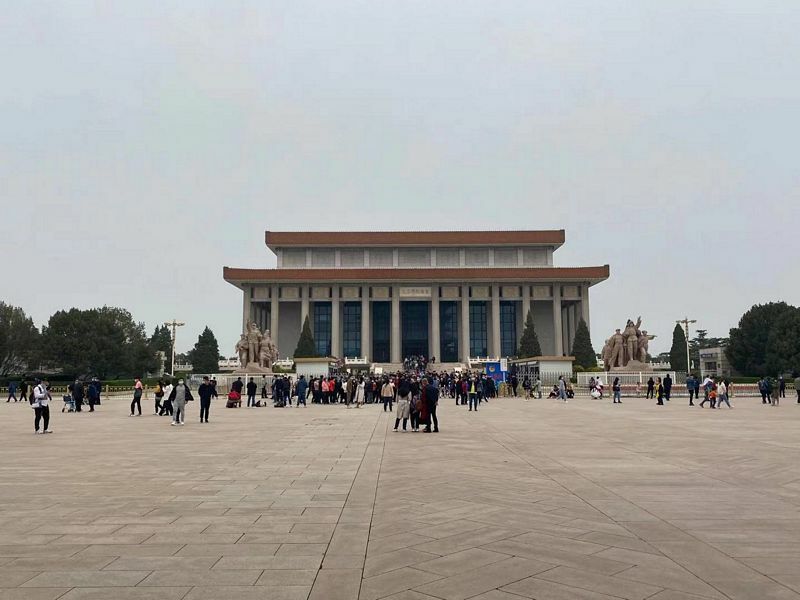 Inhuman may be the vibe, but is it also the truth? There are many claims for and against the reality of this being the actual body of Mao Zedong, and he really doesn’t look all that real at all, even compared to the other folks I have seen lying in state (Lenin, Kim Il Sung, Kim Jong Il), but who really knows (not me!), so do your own research or just embrace the ambiguity!

Out the back of the mausoleum are some souvenir shops. Selling Mao memorabilia, mostly cheap tat but some expensive watches too. In the early 2000s cheap watches where the second hand was the Chairman’s waving arm were very common, but these are not sold here, and neither are the lighters which play the revolutionary anthem ‘The East is Red’ anymore – I had to make do with a fridge magnet.

I have been to this site before, in fact, in 1999. Its been therefore nearly 22 years since my last visit to the Mao Zedong Memorial, and I do think it is completely unchanged in that time, just a bit more of a hassle to book and get through security these days.

This mausoleum really is a must-see for anyone coming to Beijing. With all the lining up and shuffling forward, you still only need 45 mins or so to get it all done, and while the experience of seeing the body is less overwhelming than it is supposed to be (given the hundred or so other people who will be in the room with you at the same time), it is still a quintessential Beijing tourism thing. So combine with the dawn flag raising in the square (done every day, something very popular with Chinese tour groups, but which very few foreigners ever show up for, perhaps because it is at dawn) and a visit to the Palace Museum – the Forbidden City. Or just go to see the man who did more than any other to make China the way it is today – whatever view on that you choose to take! 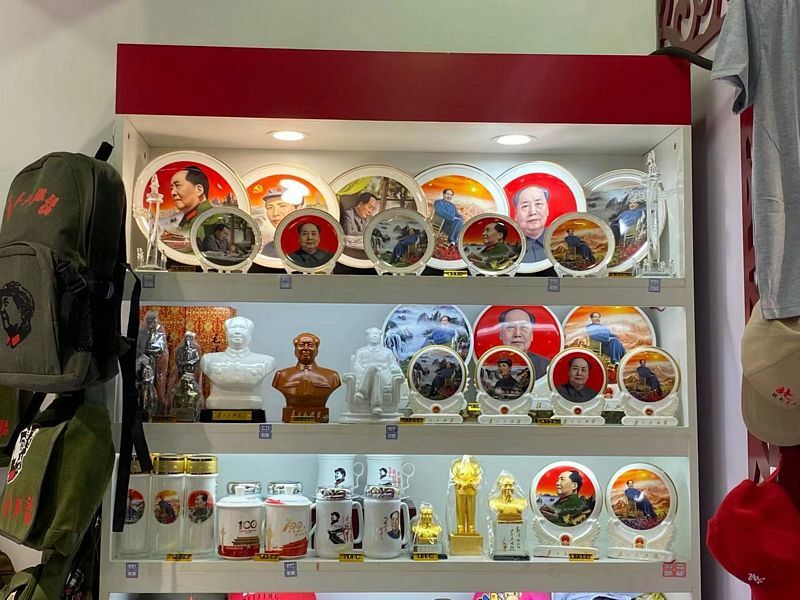