Learn about the Heaven's Bridge area of Beijing 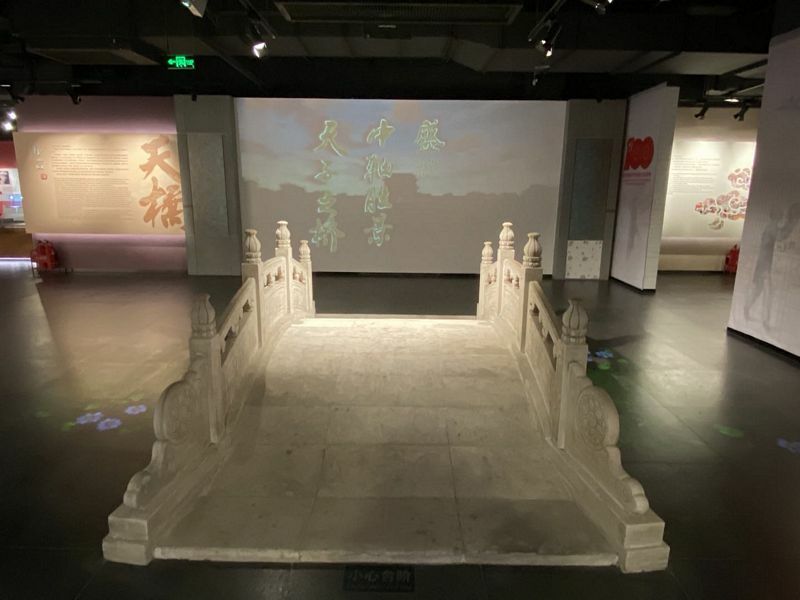 Tianqiao, or the ‘Bridge of Heaven’ is an actual bridge in Beijing, on the old route between the Forbidden City and the Temple of Heaven. Crossing the Dragon Beard Ditch, this stone structure was first built in the Yuan Dynasty and was used by the Ming and Qing emperors in their ritualistic journeys to the Temple itself. Eventually, the ditch that Tianqiao crossed was filled in and the bridge itself removed. The area kept the name though, to this day in fact this is the Tianqiao neighbourhood, and this space, between Zhengyangmen Gate (at the south end of Tiananmen Square) and Yongdingmen Gate blossomed into a commercial and artistic district, known for wine shops, street performers, and much more.

In the early republic period (early 20th Century) Tianqiao was officially established as a merchant district, the Qianmen area of Beijing (which is considered part of Tianqiao still) is known for this even now, and running from that street all the way south to the edge of the Temple of Heaven visitors would find teashops, hustlers, performers, and all kinds of street culture – it is this that the Beijing Tianqiao Museum celebrates.

Opened in 2018 this museum is to be found (with some effort, given that there are no signs) in the basement of the large and impressive Tianqiao Performing Art Centre, a complex made up of several different active theatres, keeping alive the spirit of the area. Also in this area is the Beijing Museum of Natural History (directly opposite), and the Capital Grain Museum (a couple of km to the south). 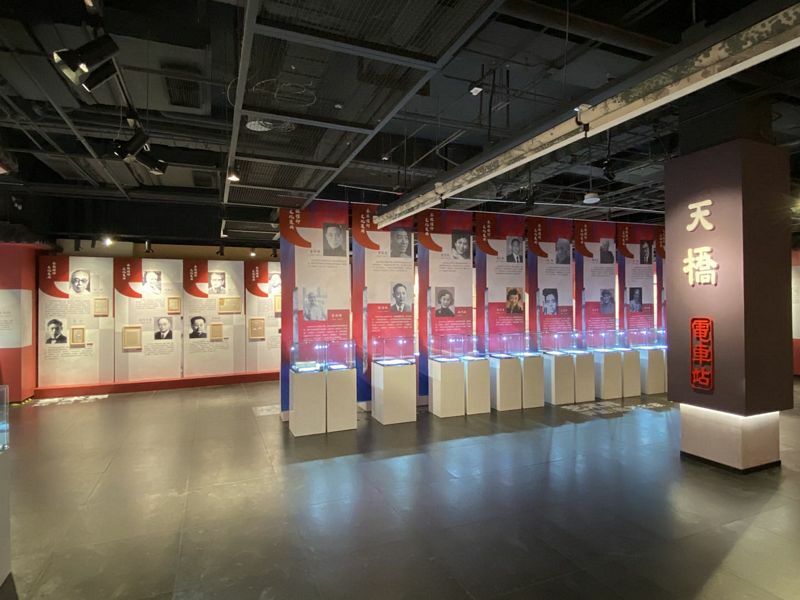 Beijing Tianqiao Theatre does a very good job of explaining (sadly with very few English captions involved, just introductions and the final conclusion) the history and culture of this area. It is basically a very good neighbourhood museum (for a very large and prestigious neighbourhood). The first room has a model of the bridge itself that visitors can walk over to start their own journey, and then a long series of mugshots and basic biographical details of many high-profile Tianqiao area residents makes up most of the next hall.

The main focus though is on the artistic and performative history of the Tianqiao area. There are several theatres nearby, and have been for a long time, but it is the street performers which are mostly featured here. So, we see examples of shadow-puppetry, strongman displays, acrobats, fortune tellers, knee-wrestlers, diabolists (for more on this check out the Beijing Diabolo Museum), contortionists, and many more of the kinds of folks who put a hat on the ground and then show off to passers-by. 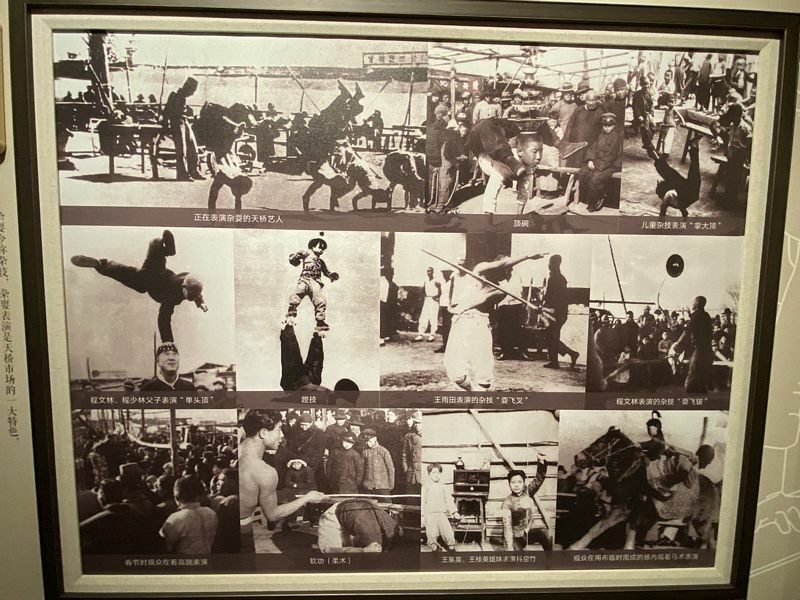 The old sepia photos of the streets are very interesting indeed and combined with the street sounds and music playing through the speakers do a good job of helping the visitor imagine they are really there watching these talented performers. It is well done and also quite fun.

Later rooms focus on some architectural elements of the Tianqiao area, plus some banking history (more boring than knee-wrestling for sure!), and then some plans and schematics from the early revolutionary days (featuring visits from the near-omnipresent Mao and Zhou Enlai of course), and then for the area’s 2010s redevelopment. One impressive picture is undermined by the photoshoppers including only cars with German license plates, which made me giggle a bit.

At the end of the trip around the Beijing Tianqiao Museum there is a large room where classes for local visitors are held, in traditional arts such as woodblock printing, calligraphy, and playing various games. Finally, there is a coffee bar which (when open) serves traditional street dishes rather than java and a handy cuppa, and a shop which has an interesting collection of items such as screen-printing sets, quirky t-shirts, and of course magnets (always welcome, to me anyway). 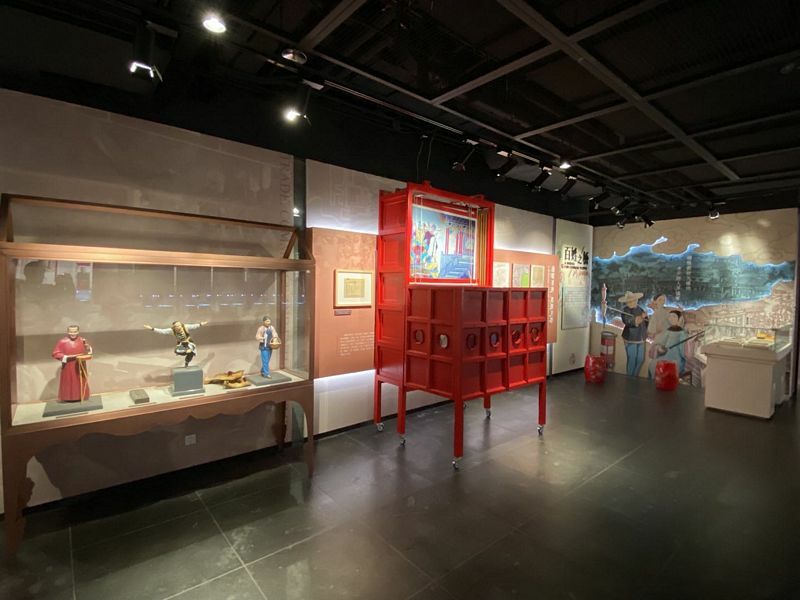 A visit to the Beijing Tianqiao Museum for most will only need about half an hour, unless you plan to read through the potted biographies of all the local luminaries that is, but it is time well spent in an interesting museum with an interesting story to tell. So, while it may not be one of the most crucial and vital place for visitors to Beijing to add to their list, for anyone who has spent a good amount of time in Beijing, and especially those in the Tianqiao area, this is a fine way to spend some time and learn a bit more about the traditions of street-culture in our fair city.

Bonus site – on the north side of the Tianqiao Performing Arts Theatre is a striking building with a very distinctive style. Clearly of European design, this is actually a reconstruction of a four-sided clock tower which stood nearby (although this current version, built only in 2003 is slightly shorter than the original, for some reason). It makes a good photo stop for anyone coming in or out of the Tianqiao Museum.