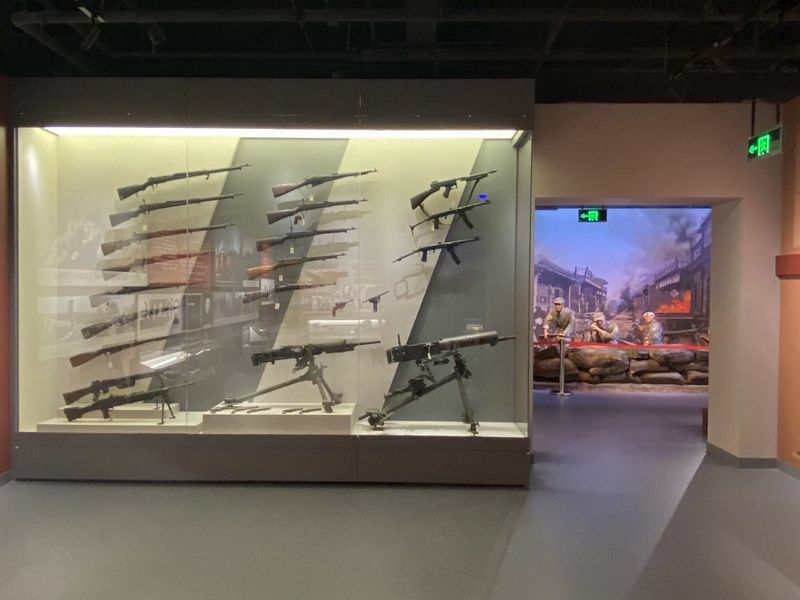 ‘Ping Bei’ refers to an area to the north of Beijing (or Beiping as it was known at the time, hence the ‘ping’ rather than ‘jing’), and the Pingbei Sino-Japanese War Martyrs Memorial Park and Exhibition Hall is situated in this very area, near the entrance of the scenic Longqing Gorge in Yanqing District, a suburban part of Beijing gearing up at the time of writing to be one of the host areas of the 2022 Winter Olympics.

The Exhibition Hall opened in 1997 but has clearly been recently renovated and enlarged, with well-lit exhibits, decently-laid-out displays, and a clear narrative throughout. For me slightly undermined by the complete absence of any bilingual explanations whatsoever (or any pamphlet, leaflet, or guide, that might assist anyone not as au fait with the struggle against Japan in this area), so any non-Chinese reading visitors will want to fire up their Baidu translation app (other apps are available) for a full understanding of what is being offered here. It is worth it though, as it’s a very interesting place indeed.

To enter the exhibition hall itself one first climbs up a small tree-covered hill to a monument to resistance against Japan. There are various picnic and eating areas on this hill, suggesting (along with the large car park with space for several buses) that this site expects to see a great many visitors at any given time. On the rainy Sunday of my visit though zero other people seemed to have signed in to have a look around that day.

The Exhibition Hall itself is an attractive two storey building with a powerful frieze by the entrance of fighters advancing resolutely, and a huge list of Pingbe area martyrs on the other side of the main door. 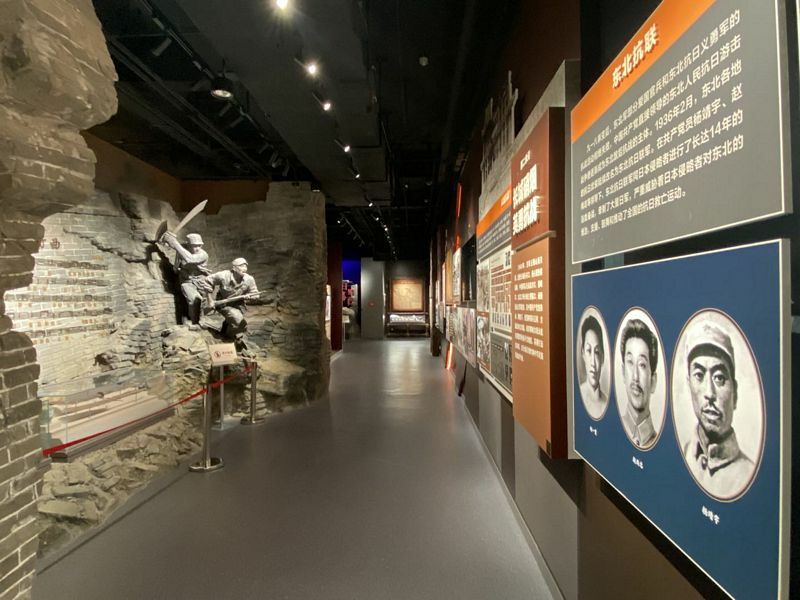 Once inside the exhibition is divided into four sections, roughly translated these are 1. Anti-Japanese War Raging in Pinbei, 2. Fighting with Blood for Victory, 3. The Red Flag Waving in Haitou, and 4. The Red Spirit Continues to Advance. This alone gives a sense of what kind of experience awaits the visitor; a combination of history, propaganda, and exaltation of those who battled the invader and occupier in this area.

We start with maps of the invasion path, and some interesting photos of how the Great Wall in this area was itself the site of armed conflicts. Then move on to the nastiness inflicted on the local population by the Japanese forces in occupation. None of this should be news to anyone with any experience in China already, but it does set the scene well.

Next, we are introduced to the forces doing the actual resistance. Naturally these are the communist forces (the united front with the KMT is somewhat skipped here, with all of the impressive waxworks of soldiers planning and fighting being from the 8th Route Army rather than any united forces). And we see dioramas of conflicts, soldiers teaching farmers political education, and a rather fun one of some young men in uniform making grenades from a crate of gunpowder they keep next to a raging furnace (which seems risky to say the least).

There are also profiles of various local martyrs, tales of individual tragedy, heroism, and endurance, as one would expect in an exhibit about resisting such a brutal occupation. And it this is presented in a not-so-subtle, but also not too OTT way. 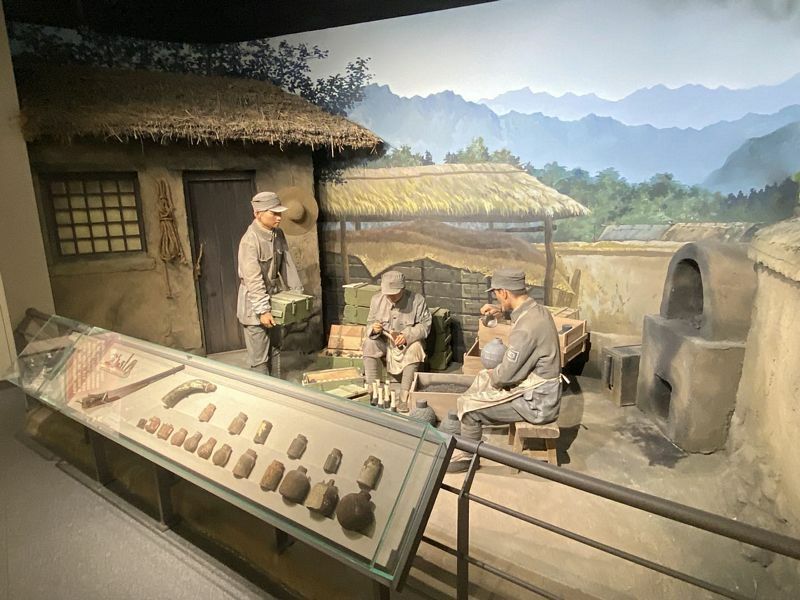 It’s all rather interesting for sure, and of course very important at a time when the last people to experience such things directly are fewer and fewer, and there has clearly been a lot of effort made to modernise this museum and make it both attractive and educational, I do think that spending a few extra kuai to get some translations included would have internationalized the story a bit and made the place more accessible to people from overseas, but this is something that is increasingly overlooked in such museums in China, to the detriment of their accessibility, sadly.

There is no café here, which is a missed opportunity as it is a lovely spot with plenty of seating out in the hillside area, but there is a shop. Which sells a very wide range of books by and about Xi Jinping (who wasn’t involved in the Pingbei people’s resistance), and only one or two items (an overpriced tin cup, a book bag) which are actually specific to this museum. This is a disappointment indeed (to those of us who love to pick up a magnet when visiting a new place).

Whether to recommend this museum is a bit of a tough call; it is far outside of the city centre and at least 90 minutes by road from urban Beijing, so it is inconvenient to say the least, but it is not far from Yanqing, and also various Great Wall spots, so can easily be combined with a trip to other worthwhile places, if you have access to a car.

For anyone interested in the narrative of resistance to Japan it is very strongly recommended though, and if you want the full deep dive then be prepared to take a translator along, or to dig deep with a translation app, and allow an hour or two to see and read every exhibit, rather than the 30-40 minutes needed for getting the gist while wandering through slowly. 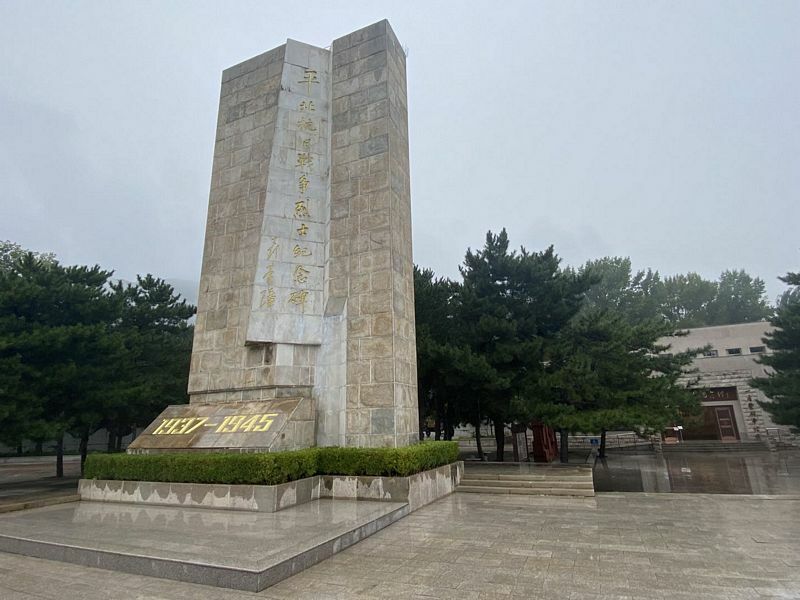