Changes at the Pyongyang War Victory Monument over the years

Before & After; The Pyongyang War Victory Monument
in North Korea

A Koryo Tours blog series looking back through our vast archive of photos taken on the thousands of tours to North Korea we have operated since 1993. Observing changes in North Korea (and the lack of them in some cases) over the years in various areas and over various time scales.

One of Pyongyang’s showcase attractions is the massive Victorious Fatherland Liberation War Museum. This is an exhaustive and exhausting colossal building dedicated to telling the (DPRK version of) the story of the genesis of the Korean War. Including, the battles fought, the defeat of imperialist aggression by the heroic Korean People’s Army, and much more.

It is an intense place. There are no holds barred when outlining the sacrifices of the people of the north of Korea; complex accounts of battles planned and won, of the enemy resorting to (alleged) use of germ weapons, and the final triumphal victory as the armistice was signed on July 27th, 1953.

It is no exaggeration to say that an understanding of the Victorious Fatherland Liberation War (the Korean War) is vital to understand the national psychology that guides the DPRK to this day. And no place is better equipped to provide this in just a couple of hours than this museum.

Out the back of the complex though, one finds this powerful statue. A monument to Victory set at the top end of a concrete park lined with statues representing crucial and famous events in the war itself.

Our first photo, from the early 2000s, shows open space behind the Victory Monument, this is because at that time the museum (known now as the ‘Old Museum’, despite being built in 1963 and actually being the second incarnation of this establishment) was a few hundred metres away from this site. 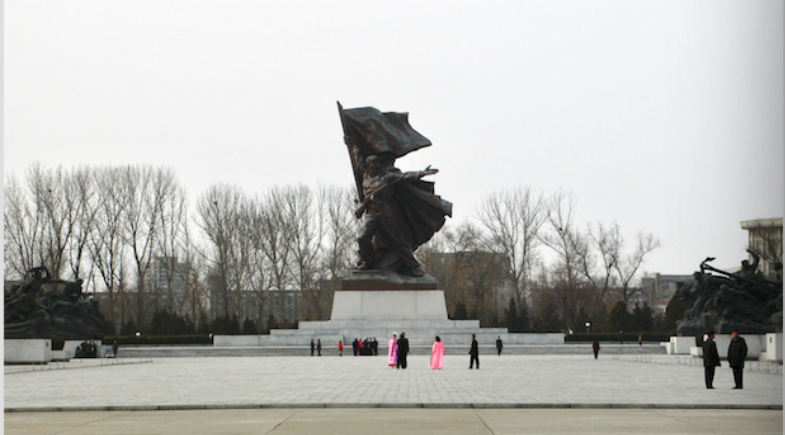 In the second photo though, things have changed.

In 2018 the New Museum was opened. A vastly expanded and modernised version.

This time the main entrance was built right behind the Victory Monument and so now visitors combine all these sites by starting with the concrete park (now also lined with captured UN and South Korean war materiel) and continuing on into the museum for the necessary educational experience.

As you can see in the photo below, a large fountain complex was also placed here in front of the statue.

The whole area now is a little less stark and severe than it was when it was just concrete blocks. It is still a large area built to accommodate many thousands of visitors at the same time, but it is a little less alienating in the more recent version.

The War Victory Monument itself may not have changed all that much, just becoming a bit shinier, and having an inspirational message praising the sacrifices of the military, attributed to Kim Jong Un, affixed to the base.

However, it is the background of a photo from this angle that has changed – with a whole new amazing museum built between these photos being taken.

Have you been to the Victorious Fatherland Liberation War Museum?
If not, then sign up for a trip with Koryo Tours for an intense experience like no other!