With Euro 2020 finally kicking off (it’s coming home…maybe!) and several of our beloved Beijing Guo’an players turning out for China in World Cup qualifiers, there is football fever in the air for many of us in Beijing. It seemed therefore to be the ideal time to take a trip to the home of football – no, not the hallowed turf of Wembley Stadium, or the HQ of the UK FA, but the city of Zibo in Shandong Province, or to be more exact, the suburb of that city called Linzi, somewhere not too many have heard of, but a place that back in the day was the capital city of a major country, the state of Qi, which existed for hundreds of years, and which, apparently, bequeathed to the world the beautiful game; football!

The history of the Qi State is a complex and deep one, existing in various forms from the 11th Century BCE until its final absorption into a more united China by the Qin Dynasty in 221BCE, bringing an end to the Warring States period in which it had been involved. Known for its respect of culture, scholarship, and music (noted by Confucius, who visited the country), as well as urban design and architecture, and building the first Great Wall in Chinese history – across what is now Shandong Province, and which is still extant in many places.

Also, the money used in the Qi State is exceptionally cool, unlike the standard Chinese round-coin-a-with-square-hole, Qi used 'knife money'; bronze and iron formed into the shape of small knives and then strung together through holes in the handle hilt, definitely more badass than a string of round things, although probably more damaging to the wallet and pockets of the user.

It’s not this deep culture and history I was here for though. Linzi is home to many museums (of Qi history, of Science and Technology, and one that is under renovation and due to open again later in 2021 that features a mass sacrifice pit of horses). The greatest legacy though is apparently the invention of football, so I came to find out how legit this is, and what I could learn about the ancient history of this sport.

The Football Museum is free to enter, but an alarming amount of data about each visitor is harvested (even by Chinese museum standards; do they really need a photo of me for their records?) and is spread over two floors into three sections. The entry hall contains a large photo of Xi Jinping and former British Prime Minister David Cameron visiting the football museum in Manchester, England, and discussing the national shared interest in this most effective soft-power export from Britain…or is it from China? 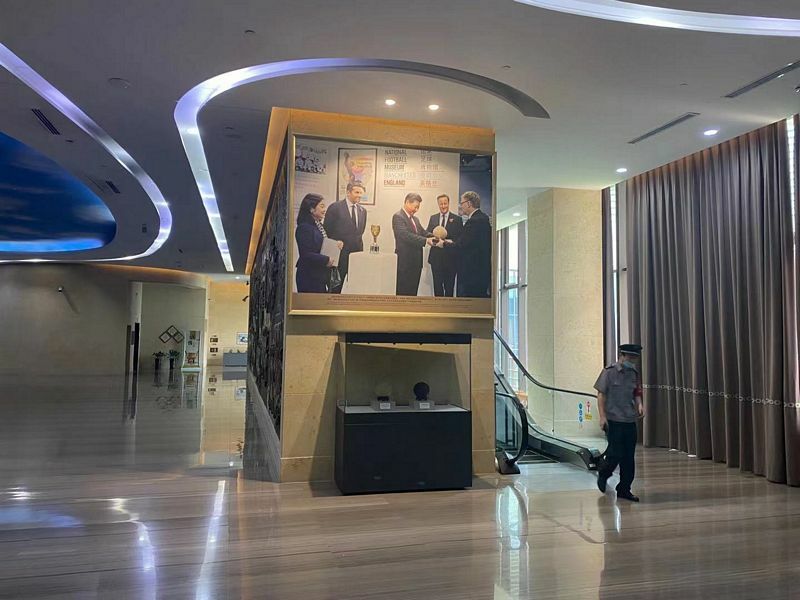 Cuju is the name of the sport that is seen in China as the precursor to modern football. While surely every ancient society has some version of a game that involves kicking something around (just like boxing etc. who really ‘invented’ the concept of fighting? It’s always just credited to whoever wrote down some rules) this game involved kicking a ball made of a pig bladder wrapped in cloth and inflated, through a goal made up of a net usually erected on some posts, a kind of combination of football and basketball. 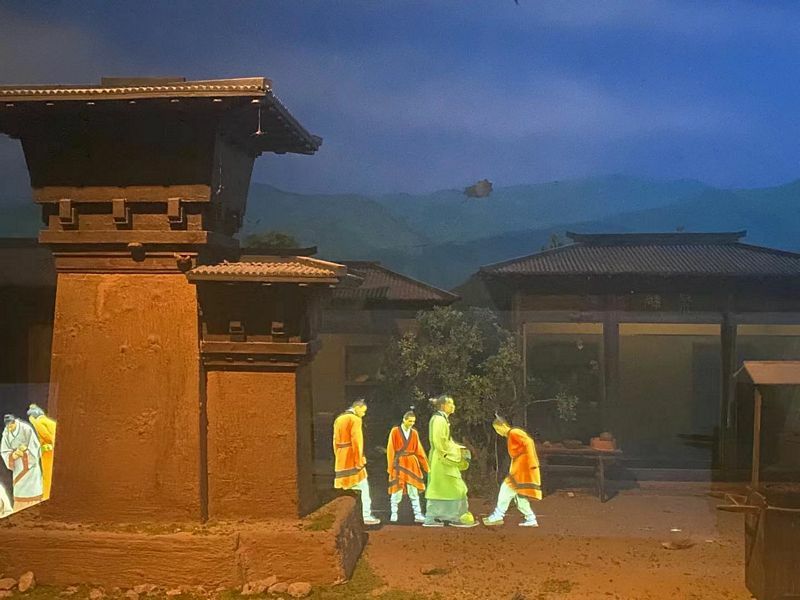 The rules of Cuju are not well explained here and most models and paintings displayed seem to just show a few people passing a ball to each other from just a couple of paces apart, of doing keepy-ups, more than playing full matches. The development of ball technology is interesting though as more and more seams and patches were added. A diorama of a cuju workshop is quite fun and a display of pottery shards, some from thousands of years ago, showing cuju being played is well done too. The rise of the sport through the Qi state, Qi Dynasty, Tang and Song Dynasties is explained, then the decline from the Yuan Dynasty (the Mongols apparently preferred more martial efforts) and Ming and Qing Dynasties is a little rushed. Great effort is made to show off FIFA’s somewhat craven acceptance that cuju is football and when the questioning visitor (me) wonders how this could be a precursor when there are no apparent historical links to modern footy, but there are some displays to show that Turks from western China and Central Asia may have taken the game west, so that’s a…maybe, possibly from me at least.

There is even an alter to some kind of football/cuju God in this museum. My wife generously gave the God 1RMB, said a prayer, and England defeated Croatia 1-0 just a few hours later. So, make of that what you will!

This section of the museum actually does a rather good job at giving an introduction to the Qi State itself, its extent, key dates, history, and so on. So, a bonus for those of us who are fans of both history and football.

Suddenly more modern. Opening with an interior street which is perhaps supposed to be in some kind of Disney England as street urchins chase a ball and window displays give a brief history of the formation of the first Football Association and their institution of the rules of the game – seen as the UK version of the ‘invention’ of football. The collection here lacks a bit of narrative, with windows of the first established football clubs suddenly being interrupted with a display of the referees' kits from the Asian Football Confederation, but it is quite fun anyway. 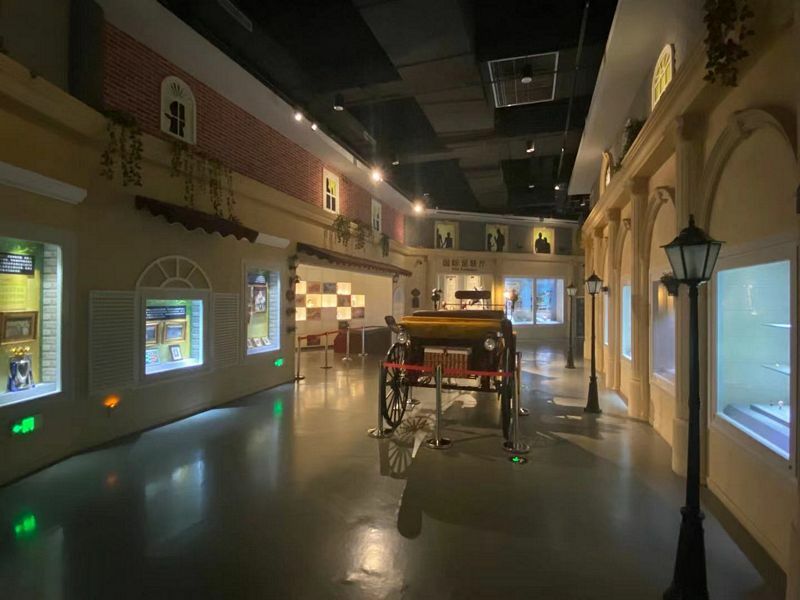 Another room displays the history of World Cup hosts, mascots, top scorers, and so on, is also well done. Although someone should remind this museum that there was also a tournament in 2018, as they seem to have gone up to 2014 and then decided that football was finished.

A circular hall with rooms for practising skills (some open, some closed, kids here were shamefully taking shots by throwing the ball - testament perhaps to the popularity of inferior sports such as volleyball and basketball in today's PRC) is next, with lifesized (not all though, surely Cristiano Ronaldo is taller than Leo Messi!) of footballing legends, and its nice to see Women’s football represented here, too, something often overlooked, even in a place such as China where the women are more successful on the international scene than the men. Through the café, we come to a few rooms explaining the history of football, not cuju, in China. Here the museum has given up on the previously excellent English translations, which is a pity as this is an interesting exhibit. There are displays of early 20th Century teams being formed, some pioneers of the game, trophies and medals from early tournaments and fun souvenirs such as gifts from foreign FAs and even a program from the time when Middlesbrough FC took on the People’s Republic of China XI in 1979. The history of the modern Chinese Football League, as well as the national team, is also displayed; I was hoping for some detailed boards about each team and there is some info about Shandong Luneng Taishan FC (the local team) but not much else for fans and followers of different clubs. It’s a good display, but could have done with a few more rooms being added.

There is also a courtyard in the museum which a cuju field, sadly this was not in use at the time of my visit, so I didn’t get the chance to try out what skills I may have. 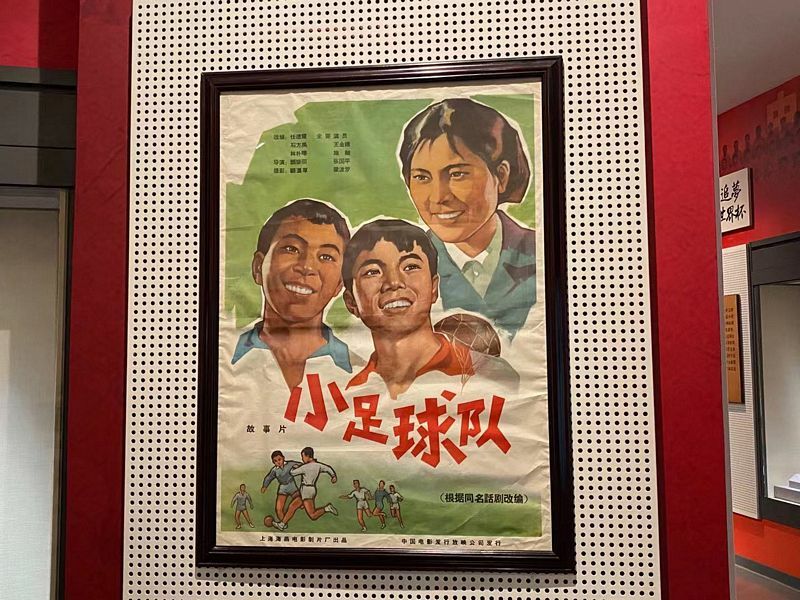 Is the museum worth it? Kind of, if you’re in the area. No real line is drawn between cuju and football other than that both involve kicking a ball. Just because the famously venal bosses of FIFA certify that the game started in China, this doesn’t necessarily make it conclusive. Cynics may suggest that FIFA did this to suck up to what may be the next global sporting superpower…I would never say such a thing, of course!

If you find yourself in central Shandong though, there are worse places to visit, and if you’re concerned about how well your team is doing then it seems a few pennies to the ancient god of cuju is worth a try and works out far cheaper than the brown envelopes often passed to FIFA bosses over the years (allegedly, I should add!)

Linzi Football Museum is located at 759 Linzi Main Street, Linzi District, Zibo, Shandong Province, China. High speed trains between Beijing and Shanghai often stop in Zibo and the Linzi suburb is around 20km from the main train station in the centre of Zibo. Entry is free, but bring passport/photo ID.