Gardens of China and the world 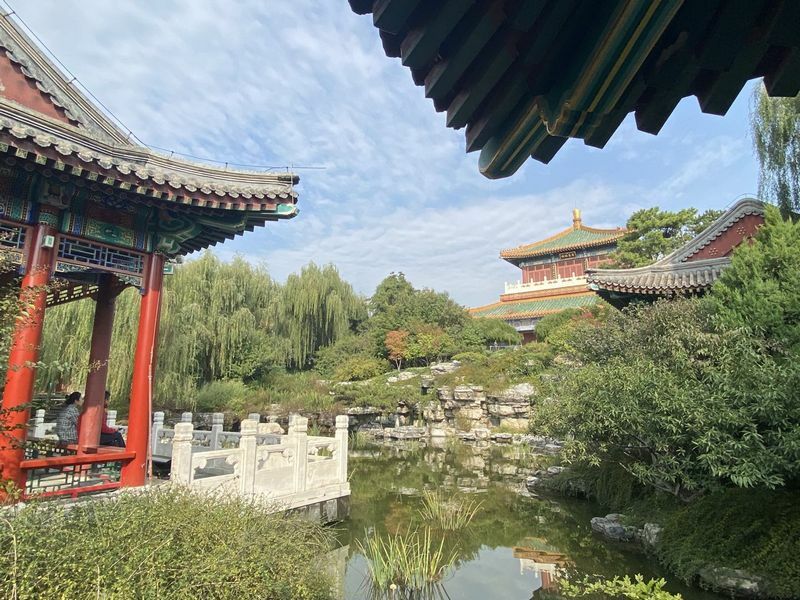 Beijing Garden Expo Park is located in the western part of the city, very close to the Marco Polo Bridge (Luguo Qiao) and runs alongside the Yongding River. Initially the venue of the 2013 Garden Expo, this 267 hectare park was then converted to the form it has today – a showcase of styles and design philosophies for parks and gardens of the world and of China in particular. This is a truly vast establishment which requires a substantial investment of time and energy to visit, so put on a good pair of shoes, pack a lunch, and go early – the park opens at 7AM from spring to autumn, so a long day to add full value is very possible for early risers.

The reason for my visit here was, somewhat embarrassingly, that I believed that The Museum of Chinese Gardens and Landscape Architecture was located within the Garden Expo Park, whereas, in fact, it is just outside and there is no need to visit the park at all to get to the museum. Three hours and over 12km of walking later this was to dawn on me, but by that time I had covered as much of the Expo Park as I could.

Arriving by subway at the Garden Expo Park station one would assume one would be right on the spot to start a visit, but from the station it is a 1km or so walk along a plain stretch of road to get to the nearest entrance at the south end of the park. I bought a ticket (cash only for foreigners for some reason) for 20RMB and was admitted to the park. There are small electric shuttle buses plying a route around the park which cost 30RMB for five rides, and family cycles available for rent too, but none for the solo visitor (they are the kind of bikes that are more like pedalled cars), so I was to be on foot for the duration.

The first section I arrived at was the international one, with the map advertising a European zone with a Versailles-like building looking over a series of gardens labelled as ‘Barcelona Garden’, ‘Longleat Garden’, and so on. However, what I found instead was a shoddy French imitation building and some tiny rectangles of planted shrubs next to a drained fountain. These were apparently supposed to be a maze too, but at barely a foot in height this was a fairly simple place to navigate through. I’ve been to Longleat, and Versailles, and Park Güell in Barcelona – they are absolutely nothing like this patch of shrubs. 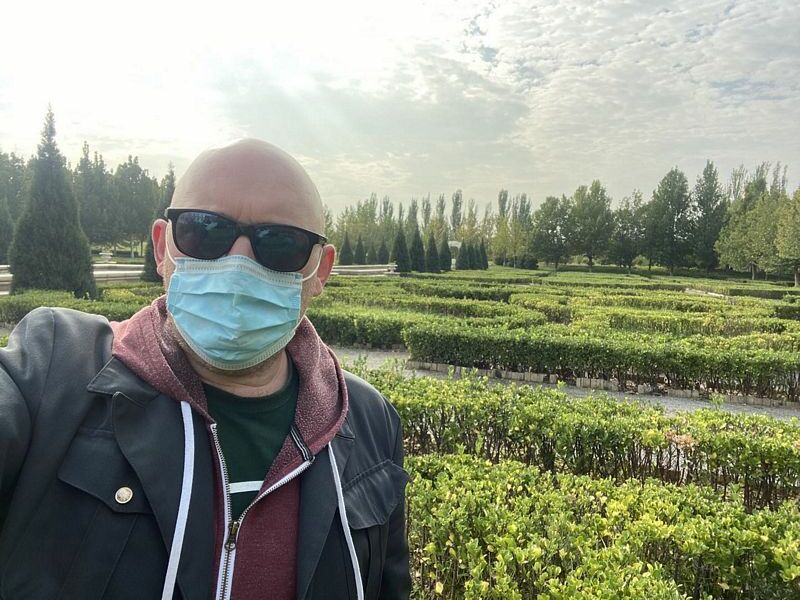 How can I get out of this complex maze of bushes? – Oh, just step over them.

Next, the Islamic garden, behind a crumbling blocky building with a greying dome on top – home to a closed art shop with various scrolls yellowing in the windows. I didn’t expect the Alhambra or anything, but a courtyard of more of the same shrubs from Europe was all they had. The Iranian Garden labelled o the map was nowhere to be found (unless it is a patch of dead grass and garbage, which I did find), and the Indian garden was in fact literally just an abandoned branch of the excellent curry house chain Ganges.

Could it get worse? In fact, yes! I stopped at the gardens for Macau and Hong Kong – the former looks more like a crumbling Decembrist dacha somewhere forgotten in Siberia, and the latter just had a rusting silhouette of the HK skyline, with a drained ‘harbour’ in front of it. Dystopian, and just utterly lame. 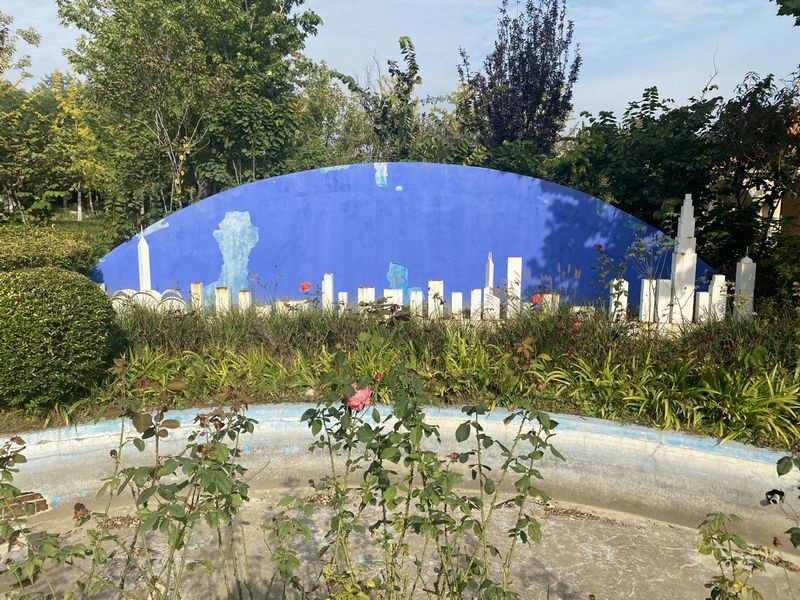 With the crappiness of the international section of the Beijing Garden Expo Park behind me it was on to the areas covering different cities and provinces of China. This was a huge improvement (over a great disappointment, so a low bar to get over) but was still a mixed bag. It is expected that different areas will feature their own characteristics as identifiers, so the Hohhot (Inner Mongolia) garden contains a Yurt and a statue of a lamb, the Harbin garden an outline of some Russian-style architecture, and so on. But the Crumbling Urumqi garden seemed to be made up of a drained pond and an artificial cliff with a Boddhisatva statue in a niche. Of course, whenever anyone thinks of Urumqi they naturally imagine Buddhism, right?

The Chengdu garden was supposedly based on promoting the Giant Panda, but beyond a concrete statue at the entrance all they offered was dead grass, an abandoned building, and a drained pond (drained ponds are among the most ubiquitous of features here). The Shenyang garden was actually fairly well maintained, but its square of concrete with a non-drained square pond, no plants, and some statues of citizens looking into the distance as if pondering the inevitability of the demise of all that they know and love gave off strong dystopian vibes, with the carved poem about Shenyang from the pen of Emperor Qianlong not adding anything to the context at all. 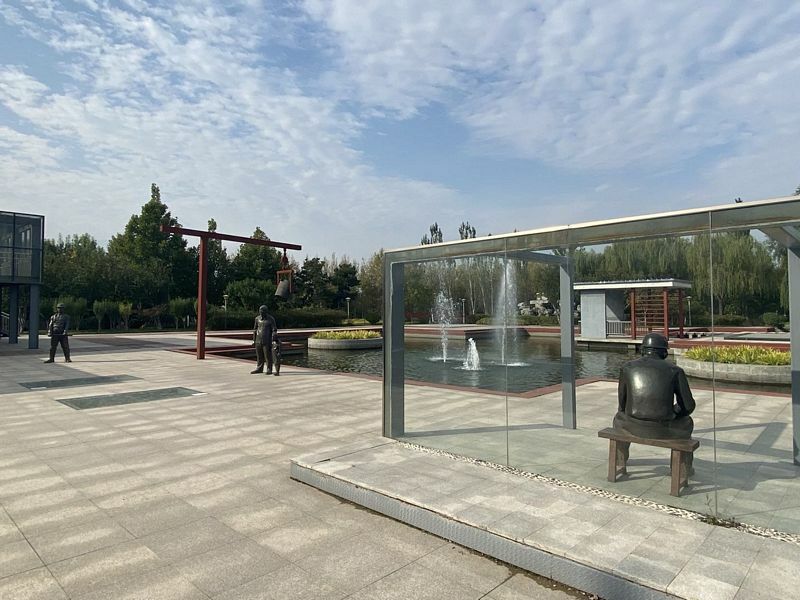 However I had a small stroke of luck just as it seemed that I was doomed to wander aimlessly past drained pond after drained pond; an older Beijing couple approached me to try out some English and when I told them I wasn’t too impressed with the park they advised me to check out some specific gardens – the Beijing garden (which I had been to, and which is actually excellent, picturesque, and impressive), as well as those for Fujian, Guangdong, and Jiangsu. Thus advised I sought out these gardens to find that the helpful couple were completely correct; they were all excellent and improved the trip immensely.

The Jiangsu and Guangdong Gardens especially were quite large and benefited from scale as well as representing areas with very notable architectural styles when it comes to garden design. So the Jiangsu area was laid out like one of the more attractive parts of Suzhou city, and provided a genuinely lovely place to pass some time. All told, I spent around three hours at the Beijing Garden Expo Park, and about a third of this was at sites that were impressive and beautiful, the rest was either wandering (it is huge), or wondering why some of the gardens seemed abandoned or why they were just so poorly thought out.

For anyone with an interest in the garden and park styles of certain parts of China this is a good place to visit, but for sure it is inconsistent in terms of quality, with whole areas being more depressing than enlightening, and the real value being spread around the park and not conveniently located in just one area. Combine with The Museum of Chinese Gardens and Landscape Architecture for a fuller understanding of what a Chinese garden really is, or (frankly, and a little harshly) just skip the park and head for the museum which is far better equipped, has attractive smaller garden examples, and is just better maintained and presented all round. 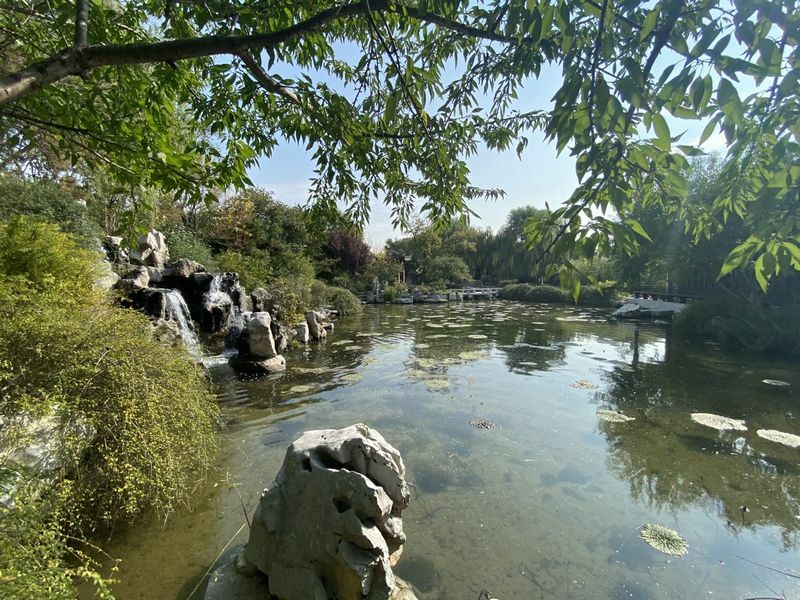